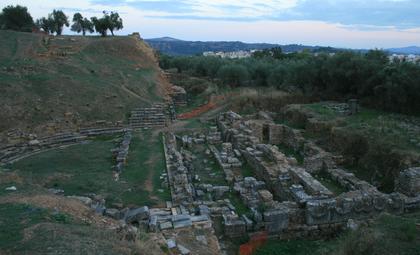 The ancient Athenian historian Thucydides made a prediction in his History of the Pelopponnesian War that has come true with a vengeance.  He wrote that “…[if] Sparta were to become deserted and only the temples and foundations of buildings remained, I think that future generations would, as time passed, find it very difficult to believe that the place had really been as powerful as it was represented to be. Yet the Spartans occupy two-fifths of the Peloponnese and stand at the head not only of the whole Peloponnese itself but also of numerous allies beyond its frontiers. Since, however, the city is not regularly planned and contains no temples or monuments of great magnificence, but is simply a collection of villages, in the ancient Hellenic way, its appearance would not come up to expectation. If, on the other hand, the same thing were to happen to Athens, one would conjecture from what met the eye that the city had been twice as powerful as in fact it is.” (Thucydides, History of the Peloponnesian War, Book I, 10, 2.)

This statement was as much a criticism of Athens’ building program under Pericles (that had diverted contributions from the Delian League, intended for defense against the Persians, to building extravagant temples in Athens) as a critique of Sparta.  Yet it has misled modern scholars and novelists to portray Sparta as if it were a primitive village of dirt and mud.

For example, in his best-selling novel Gates of Fire, Stephen Pressfield calls Sparta “a village” adding: “The whole stinking place would fit, with room to spare, within His Majesty’s [Xerxes of Persia’s] strolling garden at Persepolis. It is … a pile of stones. It contains no temples or treasures of note, no gold; it is a barnyard of leeks and onions, with soil so thin a man may kick through it with one strike of the foot.” (p.188). Nicolas Nicastro is only willing to concede the dominant superpower of Greece was “an agglomeration of sleepy villages.”

These and other modern writers are guilty of both a too hasty reading of Thucydides, and a failure to consider other evidence.  Thucydides complains that Sparta “is not regularly planned” – but then nor is London. And he says it is “simply a collection of villages, in the ancient Hellenic way.”  This is not the same thing as saying Sparta was not a cosmopolitan city, it only means that Sparta had no plan and no walls and hence grew haphazardly -- as all major European cities did after their confining medieval walls were torn down. No one today would call Paris, Berlin or Rome “a collection of villages” simply because they are in fact many villages which have grown into a single metropolis after the need for fortifications disappeared and economic growth fueled urbanization. Why should we assume that just because Sparta was made up of five distinct villages in pre-Archaic times that it was not – in its years of glory – a cohesive, dynamic city?

Likewise, when Thucydides writes Sparta “contains no temples or monuments of great magnificence” he is not denying the existence of temples and monuments, only ones “of great magnificence” – such as Pericles built with stolen funds from Athens satellite states without their consent. In short, Thucydides never claimed that Sparta was not a major, metropolitan city, nor did he deny it had notable monuments, he was only making the astute statement that, judged by its buildings alone, future generations would over-estimate the power of Athens and under-estimate that of Sparta.

The assessment of Sparta's architecture has been aggravated for modern observers by the fact that today we cannot see what Thucydides did. Sparta was destroyed by earthquakes many times over the centuries. It was flooded by the Eurotas. It was abandoned. Nothing destroys architectural monuments so completely as abandonment.  Nor should it be forgotten that Sparta has not been systematically subjected to archeological excavation in almost a century.

Nevertheless, what has come to light demonstrates definitively that far from being a place full of primitive, mud structures, Spartan architecture was substantial, monumental (not the same as “magnificent”!), and very, very typical of Doric architecture throughout the ancient world. Sparta was, in fact, the ultimate Doric power. It attained it greatest artistic flourishing in the 6th rather than the 5th century BC, and consequently its greatest monuments were archaic not classical or Hellenistic. But they existed! We can still see some of the foundations and remnants to this day. Sparta was not just a heap of peasant hits, as Pressfield and Nicastro would like us to believe.

For anyone whose imagination is too weak to mentally reconstruct a great city from the remnants left in Sparta today, we have the meticulous record of an ancient travel guide. Pausanias traveled to Greece in the 2nd Century AD, long after Sparta’s decline from prominence and more than half a century after its “golden era” in the 6th Century BC.  Yet he needs 26 sections and more than 60 pages to describe the city! And that, although he claims he has not described everything but rather has selected and discussed only “the really memorable things.” (Pausanias, III.10. p. 37)

I would also like to point out that no Spartan has left a written description of his/her city that has survived to our time. Would a Spartan have found the Acropolis in Athens “magnificent” or simply “distant, intellectual and arrogant”? Would a Spartan necessarily have admired the altar at Pergamom?  Or found it “gaudy” and “busy”-- as many people see rococo architecture today?  Sparta was different from other cities of its age, particularly Athens. Does that necessarily mean it was less attractive?

Let me be heretical. We know that in ancient Greece most statues and temples were painted vivid colors and the statues of the gods were dressed in robes, ivory, gold and jewels. What if Spartan austerity indeed extended to temples, statues and monuments and these were adorned only with natural beauty – i.e. naked stone and marble sculptures set amidst flowering trees and running water? Isn’t that what we find strikingly beautiful in Greek architecture and sculpture today? The perfection of proportion, symmetry and form in beautiful natural settings? Isn’t it the lifelike poses, gestures and expressions that appeal to us? Would we rather see Venus de Milo painted in flesh tones with red lips and blond hair? Would we admire the Parthenon in Athens as much if it was dressed in bright paint?

What if Spartan homes were indeed devoid of elaborate interior paintings because, unlike their Athenian counterparts, they were not crammed into an over-crowded city and surrounded by high-walls that blocked out almost all daylight? Spartan houses could be built on a generous plan because the city had no plan. They could incorporate interior courtyards planted with fruit trees and herbs, they could surround themselves with gardens and orchards, they could sparkle not with gold and silver but the glinting of sunlight on water in internal fountains. Spartan homes could have windows that let in the light and they might have decorated their homes, as they did themselves, with things of nature: cut flowers, bowls of fruits, running water. Such things are transient; they rarely leave an archeological record.

Sparta, far from being a “stinking village” full of pigsties and mud-huts as modern novelists portray it, was a city – as Pausanias describes -- full of marble monuments, pure Doric temples, sun-soaked theaters and imposing stoas. It was a city with large villas set in blooming gardens. And it was a city where the barracks and civic buildings were interspersed between sunny open spaces set aside for running, ball-games and horse-racing. It was a city decorated with fountains and flowering trees. In short, it was a city much as we would plan one today.