It may surprise many modern readers that Plato, writing a history of philosophy in the 4th Century BC, claimed that all early philosophers were “imitators, lovers and disciples of Spartan education.”  Furthermore, the seven “wise men” that Plato considered the fathers of philosophy included two Lacedaemonians, one of which was a Spartiate: Chilon the Wise. In the 5th century BC, it had become common to speak about “seven” wise men, whose selection varied from writer to writer so that a total of 17 are actually named on one list or another.  Significantly, Chilon – like Solon of Athens – is always among the seven.

So just who was Chilon of Sparta?

Based on the stories told about Chilon, which include personally meeting the famous writer of fables, Aesop, and Hippokrates, the father of the Athenian tyrant Peisistratos, historians conclude that Chilon lived in the first half of the 6th century BC, or – one might say – in the Golden Age of Sparta.  Furthermore, he is said to have been an ephor during the 56. Olympiad, or between 556 and 552 BC, by which time, the sources say, he was “very old.” Modern historians such as Conrad Stibbe suggest he was somewhere between 60 and 75 when he was elected ephor in ca. 555 BC.

Chilon was a Spartiate, but apparently not from a “leading” or royal family. The fact that his descendants married into both royal houses, however, is an indication of just how highly he was regarded by his contemporaries and admired by subsequent generations of Spartans.  Particularly significant is the fact that a great-granddaughter of Chilon was selected by a later college of ephors as the bride for the then childless Agiad King Anaxandridas.  Anaxandridas had been married for many years to his niece, who appeared to be barren, and the ephors after futilely urging the king to set aside his wife and take a new wife, convinced him to take a second wife.  This wife (who is nameless in Herodotus) promptly became pregnant and gave birth to a male child, who later became one of Sparta’s most controversial kings, King Cleomenes I.

What is striking about this particular marriage is less that the college of ephors would put forward the name of a girl descended from one of their own predecessors, than that Anaxandridas, who would have been a reigning king at the time Chilon was an ephor, would accept one of Chilon's descendents as a worthy bride. The importance of this fact is best understood when we remember that Chilon is credited by ancient and modern historians with raising the status of the ephorate to a body almost as powerful as the kings.

In any case, Conrad Stibbe in his excellent work on archaic Sparta, Das Andere Sparta (Mainz: 1996), credits Chilon with conceiving of the Peloponnesian League.  As he points out, throughout Sparta’s previous history, complete subjugation of a conquered people followed successful Spartan conquests. This was true for the conquest of the heartland of Lacedaemon, the Eurotas Valley in the ninth century and for the conquest of Messenia in the second half of the seventh century.

Yet after a bitter war with Tegea during the first half of the sixth century BC, in which Sparta suffered at least one humiliating defeat resulting in the enslavement of Spartiate hoplites, Sparta chose a different path. Following a decisive victory over Tegea under the leadership of King Anaxandridas, Sparta made the revolutionary decision not to subjugate and occupy Tegea, but rather to form a defensive alliance with its defeated foe. This course was unprecedented in Greek history at the time. (Note: My novel The Olympic Charioteer deals with this period of Spartan history.)

Furthermore, the alliance with Tegea was not a one-off event, but rather signaled a completely new Spartan foreign policy that was pursued throughout the rest of the century. Under both Anaxandridas and his sons, Sparta built up her power and prestige not through direct conquest but through the formation of a system of alliances, first on the Peloponnese (under Anaxandridas and Cleomenes) and with all of Hellas under Leonidas.

Yet while Chilon sought peace and alliances with Sparta’s democratic neighbors, he was according to ancient tradition together with Anaxandridas the driving force behind a series of military actions undertaken by Sparta to depose tyrants in Sikyon, Samos, and Athens. The fact that Chilon and Anaxandridas are mentioned as working together to depose the tyrants is significant because it suggests a joint policy – something that makes the later marriage of Anaxandridas to a great-granddaughter of Chilon more understandable.

Interestingly, Chilon is described in Herodotus as a seer and Chilon’s first act of extraordinary wisdom was advice that, had it been followed, would have spared Athens the tyranny of Peisistratos in the first place.  Chilon’s wisdom was thus associated with Sparta’s opposition to tyranny.  According to legend, when the father of Peisistratos, Hippokrates, was in Olympia, he received a sign from the Gods.  A cauldron full of sacrificial meat boiled over without a fire being lit under it.  Although Hippokrates recognized that this could only be a message from the gods, he could not interpret it, and turned to Chilon for advice.  Chilon told him not to marry and if he was already married to disown any son he already had.

The Spartan Chilon was according to ancient tradition also a contemporary of the fable-writer Aesop.  According to legend, Chilon told the former slave that Zeus’ job was to “humiliate the mighty and rise up the humble.” While this was clearly a reference to Aesop’s own fate, it was a strikingly revolutionary statement nonetheless – heralding the Christian notion that “the meek shall inherit the earth.”

Likewise with respect to women, Chilon set revolutionary standards of behavior that were uniquely Spartan.  While the Athenian philosopher Socrates showed utter contempt for the intellect of his wife, refusing to even take leave of her after he was condemned to death, Chilon was depicted on his grave sitting side-by-side with his wife. Even more impressive, one of his daughters, Chilonis, was recognized by name as a disciple of the philosphoer Pythagoras. In short, while the Athenians contended that women were permanent children with brains incapable of developing rational thought,[i] Sparta’s greatest philosopher encouraged his daughter to study under the greatest of his contemporaries.

But it was hardly for his attitude toward women or former slaves that Chilon attained so much fame among his fellow Greeks. Rather, Chilon was admired and honored by subsequent generations of Greek philosophers and their Roman and modern admirers primarily for his “wisdom.” Chilon was the author of some 600 verses familiar to the ancients that they admired greatly. Unfortunately, none of these have survived into the present, at least none have been identified as the work of Chilon. More famous, however, were three – typically Laconic – sayings that were carved over the entrance to the Delphic oracle and attributed to Chilon. Let me close this brief essay on Chilon by quoting him.  I think many may find his advice relevant even today: 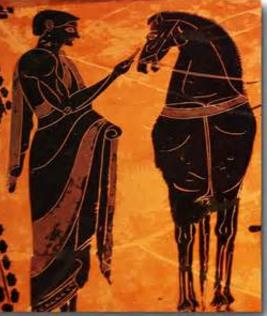 A Spartan Statesman and philosopher