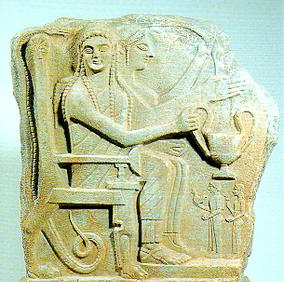 Throughout the Ancient world the relationships between men and women in Sparta were the cause of perplexity and consternation. Because of the unique status and behavior of women in Sparta, they were often perceived as having an "unnatural" and dominant role. Aristotle blamed them for Sparta's decline and an Athenian woman (perhaps somewhat jealously) asked the Spartan queen Gorgo: "Why is it that only Spartan women can rule men?" Gorgo replied: "Because we are the only women who give birth to men."


To appreciate the unique aspects of Spartan marriage, it is helpful to remember what marriage was like for elites in other ancient Greek cities.  The comparison is with Athens, because we have the most reliable information about Athens, and the focus is on the aristocratic elite because only they were not craftsmen or laborers, had the luxury of household slaves, and so are comparable in terms of social position and lifestyle to the Spartiates.