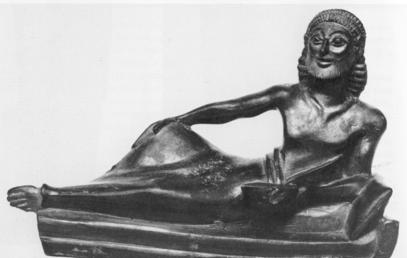 The origins of this peculiar tradition are controversial. A large number of theories have been put forward over time from the desirability of men of different ages dining together (so that young men would learn respect and benefit from the wisdom of older men) to a conscious desire on the part of the Spartan state to weaken family ties.

This later thesis is put forward forcefully by Anton Powell, for example, in his contribution to Michael Whitby’s Sparta. Powell argues that totalitarian states, recognizing the influence of the family as inherently inimical to state control, have consistently tried to break down family ties. He cites examples from National Socialist Germany, although Soviet Russia and Communist China both provide more compelling examples of anti-family policies designed to – and incidentally more successful at – undermining family structures and influence.

The problem with the comparison to 20th Century totalitarian states is two-fold. First, modern anti-family societies were consciously revolutionary. They sought to undermine the family because families are inherently conservative. Yet Powel himself stresses the fundamentally conservative nature of Sparta in his essay. If Sparta was essentially conservative, then no institution was better designed to reinforce conservative values than the family. It is when family structures break down that societies become most vulnerable to change – not the other way around.

The other problem with Powell’s thesis is that men eating one meal together at a club is not a particularly good way to undermine family structure. It may be a modern truism that “families that eat together stay together,” but most men today nevertheless eat at least one meal away from their families. The most common pattern in Western industrialized societies is for men (and often women) to eat the mid-day meal away from home. Why should it be more destructive of family life to eat the evening meal away from home than the morning or mid-day meal? In many, particularly agricultural societies (such as ancient Sparta) it is the mid-day, not the evening meal, that is most important.

I do not think there is any evidence to suggest that full Spartan citizens (31 years and older) did not eat the morning and mid-day meal with their families. On the contrary, given the intimacy of Spartan society, I think it is very likely Spartans ate both breakfast and dinner (mid-day) with their families, and went to the syssitia in the evening for what was essentially a light supper.

Certainly, as all accounts agree, Spartan men returned from the syssitia to their homes (or barracks) sober before it grew too late. Furthermore, to the disappointment of visiting foreigners, syssitia were notorious for the absence of flute-girls and courtesans, unlike the traditional Athenian symposia. At the latter, men allegedly caroused together until the dawn and then staggered home drunk after indulging themselves with prostitutes both male and female. From a wife’s point of view, the Spartan custom of syssitia was infinitely preferable to the Athenian symposia, and in consequence it is arguable that the syssitia did far more to strengthen family life than to disrupt it. In short, attempts to portray the syssitia as a component of a totalitarian Spartan state’s systematic destruction of family and individuality reveal an alarming lack of objectivity.

A more appropriate parallel to the modern world might be membership in fraternities. Applicants to syssitia, as to fraternities, had to be accepted by existing members. This meant that far from being uniform, Spartan syssitia had different characters. Some syssitia would have been more intellectual than others, some more musical, some more conservative, and others outright radical. Some syssitia might have had close affiliations to one or the other royal house, and every Spartan with ambition would have expected and relied on support from his “fraternity brothers” throughout his life.

Spartan syssitia also shared some characteristics of political associations. We know that Spartans scorned the Athenian custom of men hanging around in the agora discussing public affairs. Instead, Spartan men were supposed to discuss affairs of state behind the closed doors of their syssitia where, presumably, no helots, perioikoi or foreigners could hear them. While this may seem indicative of a paranoid or secretive society, it may in fact have been intended to encourage men to speak up more freely and more candidly than was possible in public. There are many people, after all, who shy away from speaking in a crowd or among strangers, yet nevertheless have opinions worth hearing. The syssitia would have provided a context in which such men could debate issues of importance and formed their opinions heard.

Of course, to the extent that members of a syssitia were similar in their interests and inclinations and familiar with one another since childhood, the character of a syssitia may have the closest parallel in the modern world to the German “stammtisch” – that table in the local pub at which a group of men meets night after night to discuss everything from football to fashion and politics to pop-culture. Every “stammtisch” has its own clientele, its own group dynamics, and its own character – and they all get turned out at closing bell and sent home to their families, just as in Sparta.