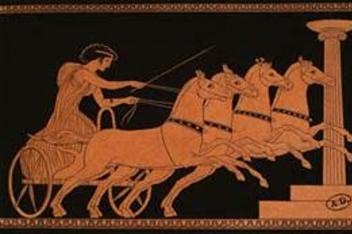 The status of women in most of the Greek world, and particularly in Athens, was similar to the status of women under the Taliban today.  Wives were acquired strictly for the purpose of the production of legitimate heirs, and sexual pleasure was sought from boys, slaves, and prostitutes (who were also unfree) in explicitly lopsided relationships in which the free, adult male dominated and demeaned the object of his sexual attentions.  The wives and daughters of citizens were excluded from all public and intellectual activities, were kept inside behind locked doors, and were not allowed to exercise or eat as well as their brothers or husbands.  Women could not inherit or own property, and it was not considered wise to educate them.

It is against the backdrop of this essentially misogynous world, where women were deemed "a curse to mankind" and "a plague worse than fire or any viper" (Euripides), that the status of Spartan women must be judged.  Spartan women were not as free as modern women.  Their primary role in society was that of wives and mothers.  Their fathers chose their husbands for them, and they were honored most for producing sons.  They did not have the right to vote (but then they weren't expected to spend forty years in the army, either), and they could not be elected to public office.  Nevertheless, they enjoyed status and rights that were exceptional in ancient Greece and were the scandal of the ancient world.

The greater freedom and status of Spartan women began at birth.  Sparta's laws required female infants and children to be given the same care and food as their brothers – in contrast to other Greek cities, where girls were more likely to be exposed (rejected and killed) at birth, were fed on a less nutritious diet than their brothers, and were prevented from getting exercise or even fresh air.

Furthermore, like their brothers, Spartan girls attended the public school, although for a shorter period of time than the boys.  At school they were allowed and encouraged to engage in sports.  But, as Plato points out in his Protagoras (342d), this education was not purely physical.   On the contrary, in Sparta "not only men but also women pride themselves on their intellectual culture."  This was more than mere literacy: it was systematic education in rhetoric and philosophical thought.

When girls reached sexual maturity, they were not rushed – as were their sisters throughout the rest of the ancient world – into marriage, thereby suffering psychological and physical injury from premature sex and frequently dying early in childbed.  On the contrary, the Spartan laws explicitly advocated marrying girls only after they had reached an age to "enjoy sex."  The reasoning was simple: for young girls not yet psychologically ready for sexual intimacy, sex was an "act of violence."  It is highly significant that Spartans condemned violence inside marriage, and understood that sex with a child is abusive.  Nor were Spartan girls married to much older men, as was usual in other Greek cities. It is estimated that most Spartan wives were only four to five years younger than their husbands.  The fact that much of Sparta's concern was for the production of healthy children does not detract from the fact that the laws protected girls from early marriage.  All Greek marriages were for procreation, but in other cities men were willing to accept the inevitable higher death rates and other physical consequences of forcing sex on young girls for the sake of indulging their own preference for sex with children. (For more details, see the essay on Sexuality.)

Because Sparta's male citizens were required to devote their lives to the military and other forms of public service, Sparta's matrons ran the estates of their husbands.  This meant that Spartan wives controlled the family wealth – and, in effect, the entire Spartan agricultural economy. (Trade and manufacturing were in the hands of the perioikoi – see the essay on Economy.)   A Spartan citizen was dependent on his wife's efficiency to pay his dues to his dining club and his son's agoge fees.  This economic power is in particularly sharp contrast to cities such as Athens, where it was illegal for a woman to control more money than she needed to buy a bushel of grain. (An excellent article on how Spartan women's economic power gave them status is provided by Maria Dettenhofer in "Die Frauen von Sparta", in Reine Maennersache? (Deutsche Taschenbuch Verlag, Munich, 1996).)

What was more: Spartan women could inherit and so transfer wealth.  Athenian women, by contrast, were never heiresses: all property passed to the next male kinsman, who might at most be required to marry the heiress in order to claim the inheritance – an arrangement that often led men to discard their previous wife, although she was blameless, just to get their hands on the inheritance of a kinsman.  Economic power has always had the concomitant effect of increasing status.  This is clearly evidenced by contemporary descriptions of Spartan women.  They were "notorious" for having opinions ("even on political matters"!) and – what was clearly worse from the perspective of other Greek men – "their husbands listened to them"!  Aristotle claimed that Spartan men were "ruled by their wives" – and cited the freedom of Spartan women as one of two reasons why the Spartan constitution was reprehensible.  (For a comparison of women's legal status in Sparta to that in other city-states, see Raphael Sealey, Women and Law in Classical Greece (University of North Carolina Press, Chapel Hill, 1990), or Sue Blundell, Women in Ancient Greece (British Museum Press, London, 1995).)

In a frequently quoted incident, the wife of King Leonidas was asked why Spartan women were the only women in Greece who "ruled" their husbands. Gorgo replied, "Because we are the only women who give birth to men."  In other words, only men with the self-confidence to accept women as equals were men at all.

Lastly, it is a frequent misconception that Spartan society was blatantly homosexual. Curiously, no contemporary source and no archaeological evidence support this widespread assumption.  The best ancient source on Sparta, Xenophon, explicitly denies the already common rumors about widespread pederasty.  Aristotle noted that the power of women in Sparta was typical of all militaristic and warlike societies without a strong emphasis on male homosexuality – arguing that in Sparta this "positive" moderating factor on the role of women in society was absent. There is no Spartan/Laconian pottery with explicitly homosexual motifs – as there is from Athens and Corinth and other cities.  The first recorded heterosexual love poem was written by a Spartan poet for Spartan maidens.  The very fact that Spartan men tended to marry young by ancient Greek standards (in their early to mid-twenties) suggests they had less time for the homosexual love affairs that characterized early manhood in the rest of Greece.  Certainly the Spartan state considered bachelorhood a disgrace, and a citizen who did not marry and produce future citizens enjoyed less status than a man who had fathered children.  In no other ancient Greek city were women so well integrated into society.  All this speaks against a society in which homosexuality was institutionalized or predominant.  (For more details, see the essay on Sexuality.)