One of the ugliest aspects of ancient Sparta to capture the modern imagination is the idea of “unworthy” infants being tossed off a precipitous cliff to their death by cold-hearted elders. I recently stumbled across another blog where the outraged comments about this custom far outweighed all other comments about the “weird” Spartans.

The tradition of Spartan infanticide has its roots in Plutarch, who specifically describes this cruel custom (Lycurgus: 16), but I personally have number problems with the way the custom is handled in modern literature.

First, of course, is the simple fact that the alleged site of these murders on Taygetos has indeed revealed many skeletons – but only of adult males not infants. In short, there appears to be some truth to the notion that people were executed by being thrown off a particular cliff, but no evidence whatever that infants were killed in this way. That said, the actual method of murder is a more-or-less irrelevant detail; the issue is the systematic murder of infants deemed unlikely to grow up healthy and hardy enough to survive the agoge and be good hoplites.

My second problem with Plutarch’s account is King Agesilaus II. Agesilaus was King Agis’s brother, and allegedly attended the agoge because he was not heir apparent. He was also “lame.” So how did an infant that was lame and not the heir apparent to the throne avoid being murdered as an infant and survive the agoge? Did his lameness develop later? Possibly, but the historical record makes no reference to an accident or injury. It appears that at least by the late 5th century the definition of “unworthy” could be very subjective and even lameness was not necessarily grounds for elimination.

Still, neither the lack of infant skeletons nor the singular case of Agesilas II actual refute or disprove Plutarch either. So we must admit the possibility that he is correct. Nevertheless, I still have a major problem with the modern discussion of Sparta’s policy, and it is the lack of context.

Most ancient Greek families were small. We do not hear of families with dozens of children as in the Middle Ages. Contemporary literature from comic opera to court documents make the notion of widespread sexual abstinence an unlikely explanation of the low birthrates. On the contrary, despite the ready availability of slaves, prostitutes and concubines, Greek literature, comedy, philosophy and legal proceedings assume frequent sexual contact between men and their wives. Birth control therefore had to come from contraception or infanticide. The documentary evidence is that infanticide in the form of abortions and exposure of unwanted infants after birth were the only effective contraceptive known in ancient Greece.

Historians hypothesize that at a woman in ancient Greece would have borne on average 4 to 6 children – and watched 2 to 4 of them die either due to intentional exposure or due to neglect. Most of those neglected/murdered infants would have been female because ancient Greek society was misogynous. Women were considered mentally and physically inferior to men, and they were a financial burden because they required dowries. In societies today with similar attitudes (Afghanistan, Pakistan, India, east Africa, traditional China), female fetuses are more likely to be aborted, and female infants are more likely to die of neglect. It is estimated that 2 million female infants die each year because they are unwanted. The Greek comic poet Posidippus put it this way: “Everybody raises a son even if he is poor, but exposes a daughter even if he is rich.”

In short, exposing unwanted children was a common (not to say universal) practice in ancient Greece. What shocked male commentators from the rest of Greece about the Spartan practice was that 1) it applied to males rather than (worthless) females, and 2) it was left to the state (elders of the tribe) rather than the father to decide a infant’s fate. It was not the fact of murdering children that other Greeks found offensive, but the fact that a father did not have absolute control over the fate of his sons. In Sparta and Sparta alone, an outsider (a tribal elder) could interfere in a father’s despotic control over his own family.

None of this makes the Spartan practice of murdering “unworthy” infants more palatable. It is and remains an aspect of Spartan society that I too find alienating. But I would welcome more recognition of the fact that infanticide was not one of the aspects of Spartan society that made it “weird” and different from the rest of Greece. Infanticide was the norm throughout ancient Greece – including in “enlightened” Athens. 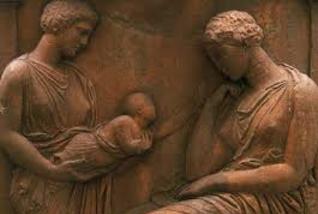 infanticide in sparta -- and athens