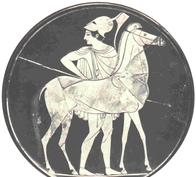 Although Leonidas’ stand at Thermopylae is widely viewed as the epitome of “Spartan” behavior, it was in fact unique in Spartan history.  No king had ever died in battle before Thermopylae, and famously, less than hundred years later in 425 BC, several hundred Spartans trapped on the island of Sphacteria surrendered rather than die to the last man.  Nor was this later incident the act of isolated, dishonorable individuals. The Spartan government was so anxious to recover the men who surrendered that it sued for peace.

Two aspects of Leonidas’ childhood may shed light on his later life: the bitter rift within his family and his education in the agoge.

By the time Leonidas was born, his father had – very much against Spartan custom – taken a second wife. The circumstances were notable.  King Anaxandridas, according to Herodotus, was “devoted” to his wife, the daughter of his sister, but their marriage was childless for years. The ephors, concerned about the extinction of one of the royal houses, urged Anaxandridas to put aside his apparently barren wife and marry again.  Anaxandridas flatly refused. Not only that, he explicitly stated that his wife was “blameless,” and he called a divorce “improper.” (A Spartan way of saying “absolutely unthinkable.”) The ephors reconsidered and came back with a new proposal; they suggested Anaxandridas to take a second wife for the sake of the dynasty. A key aspect of this deal was clearly that the former princess and now queen was allowed to retain her status not only as wife but as queen and that she almost certainly remained in the royal palace.

Anaxandridas’ second wife was a “child of the people” – probably selected by the ephors because she was the direct descendent of Chilon the Wise, the man usually attributed with greatly increasing the power of the ephors, effectively turning them from mere agents of the kings into independently powerful representatives of the Assembly.  Anaxandridas “did his duty” and sired a son on this second wife, but it is unlikely that she lived under the same roof as his favored, first wife, or that she enjoyed his affections or attentions after she had performed her dynastic function. Certainly, she bore no children except the one son, Anaxandridas’ eldest son and heir, Cleomenes.

On the other hand, Anaxandridas’ first, allegedly barren, wife became pregnant shortly after the birth of Cleomenes. Despite suspicions that this was a trick of some kind, she gave birth -- in the presence of the ephors -- to a healthy son, Doreius. What is more, she went on to give Anaxandridas two additional sons: Leonidas and Cleombrotus.  In short, Anaxandridas continued to cohabitate with is first, beloved wife, while his second consort was apparently ignored and neglected.

The importance for Leonidas is that although he would initially have grown up in an apparently in tact family unit, he would soon have been confronted with the underlying rivalries between his older brothers, Cleomenes and Doreius.  While we cannot know what Anaxandridas’ first wife felt about his second (or the fact that her husband allowed himself to be persuaded into sharing her bed), we can be certain that she favored her own son over her rival’s. Because Cleomenes had been born first, however, he was technically the heir apparent. Herodotus further claims that even as a child Cleomenes showed signs of mental instability (“was not quite right in the head”).  Dorieus, in conctrast, was the “finest young man of his generation.” This undoubtedly fed the hopes of his mother – and Doreius himself -- that he would take his father’s place on the Agiad throne when the time came. Herodotus records that Doreius was “confident” he would succeed his father, and was correspondingly “indignant” when “the Spartans” (the ephors? The Gerousia? The Assembly?) made Cleomenes king instead. So indignant, we are told, that he could not bear to remain in Sparta under his half-brother’s rule.  Instead, he set off with men and ships – but without the approval of Delphi – to set up a colony in Africa.

Notably, Leonidas did not go with him. Nor did Leonidas go with Doreius on his second, sanctioned adventure to Sicily, several years later. There could be any number of reasons why not, but one plausible explanation is that Leonidas was more at loggerheads with his older brother Doreius than his half-brother Cleomenes.  Assuming that Cleonmenes was raised in a separate household and did not attend the agoge, Leonidas may not have known Cleomenes very well at all. Doreius, on the other hand, would have been constantly in front of him, the “perfect” elder brother, who did everything right (as the finest in his generation) and very likely his mother’s darling as well. Leonidas, on the other hand, would have been the middle child of three same-sex children born to his mother.  Such children commonly display distinct characteristics.

The middle child of three same-sex children is often rebellious, difficult, irresponsible, and a brilliant under-achiever. Alternatively, they can be the “peace-makers,” sensitive but secretive, more focused on peer-groups than family. The most consistent characteristic of middle-children is that they are almost always the opposite of their older sibling.

This might explain a key feature of Leonidas’ personality. Because his older brother was rebellious and convinced of his superiority and destiny to lead, Leonidas might have become obsessively loyal, the quintessential “team player.” He might have been the “peace-maker” between the two, antagonized branches of the family, and as such been rewarded with the physical symbol of reconciliation, the hand of Cleomenes’ daughter Gorgo.

Leonidas’ education in the agoge, on the other hand, united him with his subjects in a unique way. The hardships of the agoge were designed to make youth bond together.  A common upbringing, shared hardships and follies, can even today create a sense of belonging between class-mates that bridges political differences and is more powerful than business partnerships.  The more difficult, rigorous and elitist such “school ties” are, the most enduring they are likely to be. The Spartan agoge appears to have worked remarkably well in giving Spartan citizens a sense of common identity and responsibility for one another. Usually, the kings and future kings were excluded from this  close-knit society, however, because the heirs to the throne (in Leonidas’ generation Cleomenes) did not attend the agoge. But Leonidas, like Doreius, did. He would have forged close bonds with his classmates, and been accepted as “one of the boys” even by those who did not particularly know or like him.

Furthermore, Leonidas did not became king until later in life. Certainly he was a full citizen. Possibly he had been an “ordinary” Spartan for almost half a century before he ascended the throne.  Most of his life he was therefore remained “one of the boys.”  He belonged to the club, but he wasn’t the leader, not like Doreius. This might have undermined his authority at one level. One quote is recorded in which allegedly someone challenged him saying: “Except for being king, you are no better than the rest of us.” This quote reinforces the image of Leonidas as having being “ordinary,” rather than “extraordinary” before he came to his brother’s throne.  It would also fit in with the pattern of an underachieving middle son.

But once he was king, Leonidas could count upon double loyalty from his subjects. He could count upon not only the loyalty Spartans owed their kings as descendents of Heracles and demi-gods, but also upon the more visceral, emotional, blind loyalty of his comrades. Leonidas was both a king and one of the boys.

I think this is an important aspect of Leonidas’ appeal. At Thermopylae, he was not so much commanding subordinates or subjects as rallying comrades. The paid him back in the highest currency known to man: with their loyalty unto death.