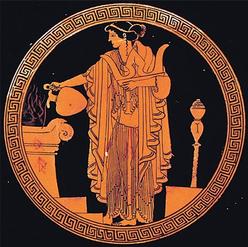 We know even less about what Spartan women might have looked like than we know about their men.  To my knowledge, no human remains that can be definitively identified as Spartan women have yet been uncovered. There are also far fewer contemporary portrayals of women in ancient art than men. Furthermore, unlike the images of men,  women in ancient sculpture and pottery are almost invariably shown well clothed. Aside from debunking modern voyeuristic fantasies about adult Spartan women going about very thinly clad, these do not reveal much about the real women they are intended to depict.

The written record is hardly more satisfying. Obviously, we have the Iliad and the tradition of Helen, the most beautiful woman on earth, a demi-goddess, and a Spartan. Herodotus tells of other beautiful Spartan women as well, notably the wife of King Ariston. But beauty, as we all know, is in the eye of the beholder and individual women, no matter how legendary their beauty, tell us nothing about the general appearance of Spartan women.

More revealing is Aristophanes description of Lampito, the Spartan female character in his farce Lysistrata.  This play from the late 5th century BC intended to amuse Athenian males after their devastating defeat at Syracuse, reflects Athenian steriotypes of contemporary Spartan women. As such, it tells us almost nothing about what Spartan women actually looked like since the audience didn't have a clue either. In a sense, Aristophanes description is no more relevant to reality than depictions of Russian women in American movies from the Cold War as brawny tractor-drivers and factory workers. Still, even the most exaggerated caricatures usually have a grain of truth, and therefore I would like to quote Aristophanes:

Lysistrata: Dear Spartan girl with a delightful face, washed with the rosy spring, how fresh you look in the easy stride of your sleek slenderness.  Why you could strangle a bull!

Lampito: I think I could. It's from exercise and kicking my arse.

Lysistrata: What lovely breasts you have!

What this description suggests is that while Athenians, perhaps in deference to the tradition of Helen, were willing to concede Spartan women might have a pretty face, they presumed Spartan women, because they were known to exercise, developed massive, muscular bodies so unfeminine that they looked like they could "strangle a bull." I would note that portraying enemy women as masculine and non-vulnerable is a useful tool in reducing/eliminating any latent pity men might otherwise have felt for the women of the foe, and so this description may also serve overall propaganda purposes of making Spartan women repulsive to the Athenian audience.

Turning to the grain of truth this description might provide, as I noted in my earlier essay on Spartan appearance, Spartans were apparently generally taller than their contemporaries, which is probably the result of more meat in their diet.  Since one of the most striking differences about the rearing of girls in Sparta compared to treatment of female infants and children elsewhere is Greece was that they received the same food as their brothers, this meat-heavy diet would have been fed Spartan girls too. (Elsewhere in Greece, girls and women were fed a different, "simpler" diet with no "extras,"--to use Xenophon's words--than their brothers.) In short, the difference in height between Spartans and the citizens from other cities would have been even more extreme when comparing women to women than men to men.

In addition, Spartan girls were expected to run and even race -- hence Aristophanes' reference to  Lampito's "easy stride."  Indeed, if we are to believe Xenophon and Plutarch, Spartan girls were taught wrestling, and were expected to master the bow and javelin, and certainly to master horses -- all things that might make a comedian compare them to women capable of "strangling a bull."

Certainly, Spartan girls could run, swim and dance. They took part in races both on foot and driving chariots, and they took part in public dances.  All this entailed spending a good deal of time outside in the fresh air, and that meant that Spartan girls were exposed to the elements and their skin would have tanned in the Greek sun.  It also meant that they grew up getting a great deal of exercise -- probably more than most girls get today, and they would very likely have been sleek and lean like their brothers, at least while growing up and in the agoge. After all, Xenophon and Plutarch stress that the girls were being treated like their brothers that regime produced the tall, lean youth of the agoge.

Girls in other Greek cities were, in contrast, not allowed to set foot outside their houses and were expected to be "sedentary." So while the Spartan girls grew tall and fit, women in the rest of Greece grew up stunted from a diet short on protein, rarely had access to fresh air, and did not exercise.  The impact on physical appearance of other Greek women would have been women significantly shorter than their own men (much less Spartans) and without muscles -- though not necessarily thin. (A girl who eats too much of a carbohydrate-intensive diet and does not move more than a few feet in the course of a day can still grow fat, but she is not likely to be lean much less strong.) In short, the contrast between the physical appearance of Spartan and other Greek girls and maidens would have been much more striking than between Spartan and other Greek boys and men.

Admittedly, after marriage Spartan women, unlike their husbands, were no longer compelled to exercise or to eat at common messes, so they might have become comparatively soft and fat.  However, they still had responsibility for their households and this entailed considerable amounts of outside work and exposure to fresh air and sunlight so that it seems unlikely that Spartan women completely lost their physical condition. Furthermore, because Spartan women did not marry until their late teens/early twenties, they would have been brought to childbed at the optimal age, while girls in other Greek cities generally married much younger and bore their first child at 15 or 16, with all the known negative consequences for their health.

Finally, I would like to suggest that Spartan women's education, literacy and economic power also had an impact on their appearance. Women who are raised to think they are important to their society, who are literate and encouraged to voice their opinions, women who have real power tend to stand straighter, hold their head high and move with confidence. I find it hard to image Spartan women sitting hunched over with bowed heads as the women of Athenian pottery do.

In conclusion, Spartan women would generally have been taller than other women, more physically fit, tanned, and over time they would have aged better -- indeed they very probably lived longer  than women elsewhere in Greece! In addition, they would have held themselves with self-assurance and moved with greater confidence. Perhaps the combination of these things would indeed have made them seem strong (and brave) enough to "strangle a bull" when compared to their contemporaries.

THe PHysical Appearance of Spartan Women