Spartan cuisine has a terrible reputation. It is consistently described as scanty, primitive and boring. I have even read books where Spartans are described eating dogs (presumably because this makes them seem more barbaric and bestial), although there is no evidence that the breeders of the much prized Kastorian hounds were dog-eaters. The “black broth,” allegedly served at every Spartan mess, has come in for particular derision, with the usual assumption being that it was an unappetizing broth at best and – for real Sparta-haters – it was a soup made of clotted blood. Modern conceptions of Spartan cuisine were most humorously expressed in a banner ad run by a restaurant when the film “300” was showing in movie theaters. It said: “Forget about Sparta, Persian cuisine was better.”

Leaving aside modern descriptions that have more to do with fantasy than history, ancient references to the shortfalls of Spartan cuisine came from the pens of foreigners, and one wonders what exposure to Spartan cooking these commentators actually had, and where? In homes, messes in Sparta, or at field messes during campaigns?

Herodotus says little about Spartan food beyond stressing that the kings had double portions and received the meat of sacrificial bulls at set intervals. He also notes that the kings did not eat double rations, but shared out their extra portions with those they wished to favor/reward. Presumably, in Herodotus’ time Spartan cuisine wasn’t bad enough to rate a bad review.

Xenophon, the classical Laconophile, does devote some space to describing Spartan diet. He stresses that in the agoge the eirenes were supposed to “furnish for the common meal just the right amount for [the boys in their charge] never to become sluggish through being too full, while also giving them a taste of what it is not to have enough.” (Xenophon, Spartan Society, 2) He goes on to say that Lycurgus fixed the rations in the messes of the citizens “in such a way that they should have neither too much nor too little food.” Clearly, both of these passages address the issue of quantity not quality.

Returning to Herodotus, it is noteworthy that he listed three hereditary professions in Sparta (Her. 6:60): heralds, flute-players and cooks. This passage is part of Herodotus’ description of the privileges of Sparta’s hereditary kings, and implicit is that hereditary office was a mark of distinction. Given Sparta’s reputation for bad cooking nowadays, the inclusion of cooks in the ranks of the hereditary professions is striking – if usually ignored. Equally noteworthy is the fact that cooks are mentioned alongside heralds and flute-players, professions that had clear relevance for the army. This suggests that cooks may also have been considered important for the readiness of the army, possibly because cooks provided food when the army was in the field. On the other hand, maybe the importance of cooks came from the fact that syssitia cooks were responsible for enforcing Lycurgus’ laws on moderate rations and drinking? If the latter, then cooks clearly had a very important function in Spartan society and for the readiness of the army!

Whatever the reason, however, it seems clear that cooks were viewed with particular respect. It is hard to imagine that men who viewed their profession as a privilege would take no pride it. And if they took pride in it, is it right to assume that a meal at a Spartan mess was a “Spartan” version of a bad institutional meal today? Did men who learned their profession from their fathers and taught it to their sons universally and perpetually lack skill and dedication?

Maybe the bad reputation of Spartan cuisine originated from the fact that most Greeks favored sophisticated cooking with complicated preparation, spices, crusts, and sauces. Maybe the fact that most Greek diets were heavy on fish also affected perceptions. Spartan cooking was simpler and included more meat, especially game. The lack of elaborate sauces, exotic spices and seafood may have made Spartan cooking seem plain to an Athenian aristocrat’s palate, but that is not necessarily the same thing as it being bad.

Syssitia cooking would have been based on the contributions which members brought from their kleros. Any kleros in Lacedaemon would have produced fresh and/or preserved fruits and nuts – apples, pears, plums, apricots, figs, lemons, almonds and chestnuts, for example, are all native to Lacedaemon. There would have been olives and olive oil as well as grapes and wine, all freshly produced at home. Fresh eggs, fresh milk and homemade butter and cheese from cattle, sheep and goats would likewise have been readily available.

Each syssitia cook would have been able to collect fresh bay leaves, rosemary, mint, oregano and thyme from the fields to help garnish roast pork, kid, and lamb, which would then be grilled over an open fire. They would also have had kitchen gardens for growing coriander, leeks, beans, asparagus, fennel, cucumbers, peas, squash and cabbage. Furthermore, while Spartan cuisine may have been short on seafood, full citizens were encouraged to hunt and to share their game with their messmates. The surrounding forests were rich in pheasant, hare, deer and wild boar. These meats too would have been grilled and then garnished with leeks and onions, bay leaves, chestnuts or other variations of native produce we cannot imagine.

Last but not least, a Spartan diet would have included fresh, warm bread, including white bread, as Lacedaemon was one of the city-states with soil suitable for wheat, and Xenophon specifically mentions that wealthy men contributed wheat flour to the messes. In short, even without seafood and fancy sauces these raw ingredients – meats grilled over open fires, fresh vegetables and herbs fresh from the garden, bread still warm from the oven – need not have been bland or monotonous.

I even suspect that Spartans (at least secretly!) enjoyed the native honey, tasting still of pine, yew and wild-flowers. Sweet bread with raisins or sesame seeds, cakes with crushed nuts drowned in honey, apple tarts and plum pies are all perfectly imaginable based on what can be produced natively and is still sold in the region today. 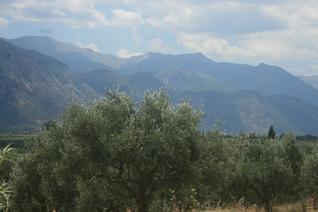 Of Black Broth and other Delicacies