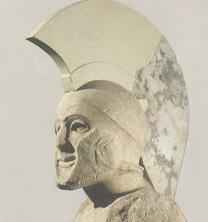 No Spartan has left a larger footprint in history and art than Leonidas. Not the commander of the Spartan army that actually defeated the Persians, Pausanias, nor the Spartan that eventually defeated Athens after the gruesome thirty-years war, Lysander, are half so well remembered .  Lycurgus and Chilon are familiar names only to classical scholars; Leonidas is a cult and comic-book hero, not to mention there is a chocolate company named for him.

Leonidas was, of course, a legend in his own time. The Spartans built him a monument at Thermopylae, notably separate from the monument to the rest of the 300, and a second monument was built to him at home in Sparta as well. His body was brought home after the Persians had been driven out of Greece.  But, unless it is an accident of archeology, larger monuments were built to the victors Pausanias and Lysander than to Leonidas.  In short, Leonidas’ appeal appears to have been greater in the modern world than the ancient. This might have many explanations – starting with the political agenda of his successors (or those who controlled his immature son) or discomfort with commemorating a devastating defeat.  The modern world, perhaps influenced by the Christian tradition of honoring sacrifice, is impressed by Leonidas’ defiance and devotion to duty more than his defeat.

There is also a modern tendency to assume that Leonidas’ behavior was “typical,” that he was indeed only doing what Spartan society expected of him, or acting “in accordance with the law.” This assumes that Spartans were “never” allowed to retreat and always chose death over either retreat or surrender.  The Spartans, of course, knew better.

Sparta had suffered many severe defeats before Thermopylae, and in no other did an entire fighting force die to the last man for a lost cause. For example, there is good reason to believe that Sparta lost the First Messenian War, and it was ensuing economic and social dislocation that led to unrest and revolution.  Certainly, Sparta was given a resounding thrashing by the Argives at Hysiai in 669 BC, but even so the Spartans retreated rather than die to the last man.  Roughly one hundred years later, Sparta again over-reached herself in an attempt to conquer Tegea, and again there were survivors; they were enslaved in Tegea and forced to do agricultural labor for Tegean masters. In 525 BC, a Spartan expedition against Samos likewise ended in humiliating defeat, but not the extermination of the expeditionary force.  Finally, in the reign of Leonidas’ half-brother Cleomenes, a Spartan force under Anchimolius was attacked by Thessalian cavalry 1000 strong at Phalerum, and, according to Herodotus, “many Lacedaemonians were killed…and the survivors driven back to their ships.”  Note, again, the survivors were driven back to their ships, which they presumably boarded and used to return to Lacedaemon. There is not a word about dying to the last man.

Nor did “death rather than surrender” become the standard for future Spartan commanders after Thermopylae. The history of the Peloponnesian war is littered with Spartan defeats; none were massacres.  Even in the infamous case of 120 Spartiates trapped on the island of Sphakteria, the record shows that they surrendered and were taken off into (brutal!) Athenian captivity.  Nor were they written off by an indignant population as cowards, "tremblers" or otherwise disgraced and worthless.  Had they been so viewed, Sparta would not have sued for peace and made serious concessions to Athens to have them returned. Even their collective degradation from full-citizen status on their return is not indicative of disapproval of surrender. On the contrary, it more likely reflects fear that men who had been in Athens for almost four years might have become subverted (brainwashed, is the Cold War term) by Athenian democracy.  After an unknown period, they were collectively reinstated, and some even ran for public office. That would not have been possible, if the majority of Spartans had felt they should have committed suicide rather than surrender.

Leonidas’ legacy was not one of blind, mindless self-sacrifice. His example was one of devotion to duty, even unto death, for a good cause.  Leonidas did not die for the sake of dying – much less take his comrades with him to a senseless death.  He had clear military objectives that he hoped to achieve by his last stand: 1) giving the other Greek contingents time to withdraw and live to fight another day, and 2) increasing Persian respect for/fear of Spartans.  Once the pass at Thermopylae was turned, Leonidas knew the Persian army would advance unopposed into Central Greece. He could not know where it would next be confronted by land-forces, but he must have feared that it might sweep through Central Greece to the Isthmus of Corinth. He must have feared that Sparta might find herself virtually alone facing the onslaught.  Anything he could do to make Xerxes hesitate to take on a Spartan army must have seemed worthwhile.  That is a legacy worth preserving.

Last but not least, as a devout Spartan, Leonidas undoubtedly believed he had to fulfill the Delphic Oracle. He knew he had to die, if Sparta was to be saved. In that sense, he was from the start a sacrificial lamb, but not until the position at Thermopylae was betrayed, did his sacrifice inherently encompass defeat as well.  He probably hoped when he set out for Thermopylae that he could die in a victorious battle – or at least an indecisive one. He certainly hoped and expected that alive or dead his advance force over 6,000 strong could hold the Hot Gates until Sparta’s full army could reinforce the advance guard. When it became clear he would die in a hopeless situation, he tried to minimize the losses by ordering the withdrawal of the allied contingents (and almost certainly all the Perioikoi troops that would have been with him).  He even tried to save some of the Spartiates by giving them dispatches for delivery somewhere. They saw through him and refused. They refused out of loyalty, out of friendship, out of personal affection for Leonidas, both the man and the king. They did not act for military reasons but for personal ones. Yet their legacy too is worth honoring.