THe Important Economic Role of the Perioikoi 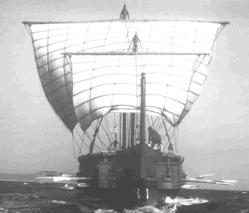 It is one of the ironies of recorded history that we generally know much more about the tiny, ruling elite in any society than about the masses that actually composed it. Thus we know about the lives and loves of medieval kings, but little about the peasants that represented more than 90% of their subjects. Likewise, Lacedaemonian history is dominated by the tiny class of Spartiates, albeit a great deal has also been written about the (allegedly unjustly) oppressed helots.  The segment of Lacedaemonian society that has received the least scholarly attention is the “middle class” – the perioikoi.

The lack of modern literature on the perioikoi is undoubtedly due to the lack of historical and archeological information about this segment of Spartan society. The fact is, we know almost nothing about them -- not their origins, their history, their laws, or their legal relationship with the ruling Spartiates and subordinate helots.

The lack of archeological finds has led some historians to hypothesize that they were an essentially rural population, hardly better off than the helots themselves.  Yet the very fact that they provided hoplites in at least equal numbers as the Spartans casts serious doubt on this thesis.  I would also note that the archeological finds in Sparta itself hardly reflect the might and wealth that we know Sparta enjoyed. For whatever reasons, the existing archeological evidence from Lacedaemon is an incomplete, indeed woefully inadequate, reflection of the society that inhabited the region in the 7th to 3rd Centuries BC.

John Chadwick in “The Mycenaean World" claims that the Mycenaeans found a native population on the Peloponnese, which they subjugated.  When the Dorians invaded, they conquered the remnants of the Mycenaeans.  This sequence of events might explain the three class system in Lacedaemon: the helots were the original inhabitants already reduced to serf-like status by the Mycenaeans, and the Mycenaeans became the perioikoi after the Dorian invasion.  All three groups were essentially ethnically distinct and status depended on who had conquered whom.  The situation appears to have been stable until the Spartans invaded Messenia and subdued another Dorian population. But all this is speculation.

Yet, while we know almost nothing about the perioikoi, we can infer a great deal. We know, for example, that in the later years of the Peloponnesian war, perioikoi hoplites were fully integrated with Spartan units – and that implies comparable levels of training, equipment and above all trust.  While the enemies of Sparta (and modern commentators) make much of the hostility of the helots to Spartiate rule, the loyalty of the perioikoi is rarely questioned – or mentioned, despite its significance.

Furthermore, we know that Sparta had a fleet but that Spartiates had virtually no opportunity to gain the extremely complex knowledge necessary to build and sail ancient vessels. We know that Spartiates were prohibited from pursuing any profession other than that of arms (and civic administration – see my earlier entry "Not Just Soldiers"), but Lacedaemon had extensive international trade. We know further that Lacedaemon produced and exported timber, pottery, and bronze works. It had mines and quarries, and, of course, every kind of handcraft necessary to daily life in the ancient world from carpentry and metal working to tanning and basket-weaving. If the Spartiates were prohibited from performing these tasks and the helots were working the land, who provided the manpower and the know-how for all these various industries?

The logical answer is the perioikoi. Furthermore, by ascribing to the perioikoi these various urban professions generally held by citizens in other Greek cities, we quickly see a way in which the perioikoi could have been both integrated and co-opted into Spartan society despite their undeniable second-class political status.  The Perioikoi had no voice in Spartan politics and yet they were expected to risk their lives side-by-side with the Spartiates. It hardly seems credible that they would have accepted this situation for long – particularly in the bad years of the Peloponnesian War – if they had not enjoyed other benefits.

The financial benefits of a monopoly on industry and trade throughout the rich territory of Lacedaemon would have been such an incentive. The very restrictive nature of Spartan citizenship, which confined Spartiates to the army and civic duties, opened immense opportunities for the perioikoi to enrich themselves.  Even if completely excluded from land-holding (which to my knowledge they were not, but which might have been the case when the Spartiate population was expanding in the archaic era), there would still have been ample opportunities to not only earn a living but make a fortune with industry and trade. The experience of other societies shows that a manufacturing and trading middle-class can indeed prosper even when politically disenfranchised (see, for example, Medieval France).  This, I believe, is the key to perioikoi loyalty and the essential character of the Spartiate-Perioikoi contract.

While Spartiates reserved political power to themselves and evolved a culture that disdained the public display of wealth; the perioikoi traded political enfranchisement for the dual benefits of economic freedom and security.  Behind the shields of Sparta’s incomparable army, the perioikoi were free to enrich themselves for generations.  Only after Sparta fell into decline and her citizen ranks grew too thin to guarantee the protection of Lacedaemon did the Spartiate-Perioikoi contract begin to unravel. The decline of Spartiate population forced an increasing dependence on perioikoi troops, which put perioikoi at ever greater risk. As long as Sparta was winning wars, that might have been acceptable, but once Sparta was defeated at Leuktra the perpetual disenfranchisement of the periokoi became untenable.  Throughout the archaic period, however, the division of labor between Spartiate and perioikoi appears to have worked admirably.