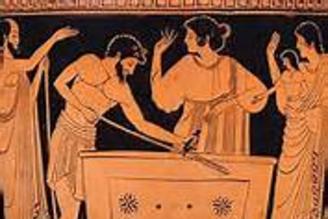 The common view of Sparta is of a society divided between the wealthy, politically privileged (albeit underfed, cowed yet brutal etc. etc.) Spartiates, and the oppressed, helpless, despised helots. This ignores the vitally important role of perioikoi, (see separate entry), but here I wish focus on helot society, particularly the fact that it too was highly differentiated. Not all helots were equal – nor equally miserable.

Historical sources make reference to helots in a variety of positions. First and foremost, of course, the helots worked the land. But helots also played a – singularly undefined – role in the Spartan army. Helots accompanied the Spartan army to Plataea, for example, and they were ordered to set fire to the sacred wood after the battle of Sepeia. These army helots appear to be a collective body under the command of the king, not the individual attendants of Spartan rankers.

However, each Spartan hoplite apparently also had a helot body servant to look after his kit and help him arm. We hear too of “Lacedaemonian” wet-nurses being highly valued, and finding service as far away as Athens, where such a nurse allegedly breast-fed the ultimate Athenian aristocrat Alcibiades. While not explicitly a helot, it is hard to imagine a Spartiate or even perioikoi woman taking a position that was usually held by a chattel slave.

The same is even more true of hereditary “town-criers, flute-players and cooks” listed by Herodotus (The Histories:6:60). Because all these functions were important to the army, I have argued elsewhere that they were not despised professions, but it is unclear whether the jobs were filled by perioikoi or helots; either interpretation is possible. Last but not least, although not explicitly mentioned, implicit in a highly civilized society with a very tiny elite such as Sparta, were people doing all the menial tasks necessary to keep a developed but still non-mechanized society functioning. In short, helots most likely did all those tasks done by chattel slaves in the rest of the ancient world. Someone in Lacedaemon built roads, dug ditches, cleaned latrines, quarried stones and extracted ore from mines etc., and I think it is safe to assume that these jobs were done by helots.

As we look closer at helot society, let’s remember that rural helots retained a substantial fixed portion (probably 50%) of the produce of that land they worked. Allegedly, at the time of Lycurgus’ Great Reforms, there was one adult male helot on each kleros, who tilled the land for the benefit of himself and the Spartiate “master.” Officially, neither the Spartiate nor the helot actually owned the land, which belonged to the state. Both were hereditary “tenants.”  As long as there is only one male heir to each tenant, such a system is more or less sustainable indefinitely. Unfortunately, however, human demographics do not produce perfect replacement and even in countries with primogeniture (such as medieval England) families die out in the male line on average every three generations. Without primogeniture, however, an excess of heirs rapidly reduces a family to penury. To avoid these consequences, societies evolve inheritance and marriage laws to regulate the distribution of wealth over generations.

Stephen Hodkiinson in his excellent study Property and Wealth in Classical Sparta (London, 2000) traces the impact of inherence laws on the concentration of wealth in Spartiate society, but helots were not land-owners and could not buy or sell land. Rather, they were transferred with the land from one Spartiate owner to another.  Still, the ancient historians tell us that some helots were wealthy enough by the end of the 5th century to buy their freedom. In short, the accumulation of wealth – albeit not land – was clearly possible even in helot society. Some helots were definitely richer than others. But how?

The key to understanding this is again demographics.  Unlike chattel slaves in the rest of Greece, helots had family units.  In consequence, the sexual relations and off-spring of helots were not controlled by their masters for their own purposes, but developed more naturally.  In Athens and elsewhere, the off-spring of slaves were unwanted extra mouths to feed (that also reduced the concentration and working life of a female slave) and so intercourse between slaves was prevented to the extent possible. The fact that it was not always possible to prevent slave women from getting pregnant would not have worried slave-owners unduly because in the ancient Greek world it was common to expose unwanted children – even of the children of citizens. The unwanted children of chattel slaves would therefore simply have been left to die. Athens did not suffer from a growing slave population, but could keep the slave population under control effectively by these methods and by selling off anyone who had become a burden or was unnecessary on the international market. Unwanted Athenians slaves, therefore, could end up in Persia, Egypt or Italy.

In Lacedaemon, in contrast, Spartiates could not sell helots outside of Lacedaemon, and more important helots lived in family units. As everywhere else on earth where families exist, fathers would have taken pride in at least their male off-spring.  Male children would have been nourished and raised to adulthood to the extent possible. Females would have received less attention, food and affection (if the evidence of societies across the globe is any guide), but enough girls would have survived to adulthood to ensure survival of the family. Barring catastrophes, populations grow over time. Thus we can hypothesize a growing helot population from the age of Lycurgus (whenever that was) to the classical period – that fateful age when the helot population outnumbered the Spartiate population many times over (though probably not more than serfs outnumbered noblemen in Medieval Europe, by the way.) This is an important dynamic that explains why the imbalance between Spartiate and helot populations was so much greater than the imbalance between the Athenian citizen and slave populations.

This simple demographic fact might also explain why helots, who could not acquire land as their Spartiate masters clearly did, would have effectively become poorer over the generations. After all, if all the descendants of the original helot tenant of a kleros were tied to the same plot of land, then a finite plot of land would have been required to sustain entire clans rather than just one nuclear family by the time two hundred years had passed. In short, each individual would have been much poorer than his ancestor.  And while there may have been a general tendency toward impoverishment, it was clearly not the fate of all helots or there would have been no wealthy helots able to buy their freedom, and no one doing all the other jobs noted above.

Instead it appears that some form of voluntary or involuntary primogeniture ensured that only one man had the status of “tenant-in-chief” on each kleros.  He might have many children and many sons, but he had only one “heir.” If there were no sons, then very likely a son-in-law became the “tenant-in-chief,” and if there were no surviving children at all, the kleros was “vacant” and the Spartan state had to find new tenants from a pool of available helots.

In the more common case of a man having more than one son, the non-heirs (most likely the younger sons) would have been “free” to pursue their fortune elsewhere.  As the property of the Lacedaemonian state, of course, helots could not leave Lacedaemon, but to my knowledge there is no reason to think they could not hire themselves out within the boundaries of Lacedaemon.

Thus younger sons who were lucky or particularly clever might have been apprenticed to learn a craft scorned by the wealthier perioikoi and prohibited to the Spartiates. Through apprenticeship to those that had taken this path before them, they would have become tanners and tinkers, cobblers and coopers, masons and dyers. As a master craftsman, able to retain 100% of their earnings, these helots would have been in a position to found families, build houses and accumulate wealth. Meanwhile, young men unable or unwilling to embark on such a slow, hard career, would have had the option of hiring out for wages to the Spartan army or state, or to individuals. Thus they could have become the personal attendants to Spartan hoplites, or worked directly for wages as teamsters and mule-drivers for the Spartan army or as construction workers or bath attendants, gardeners and repairmen for the Lacedaemonian government.  Helot girls unable to find husbands would, like the daughters of the poor in every society across the globe over the last three thousand years, have found work as nursemaids and housemaids, waiting on the women and children of those better off than themselves.

In other words, helot society was more complex than Spartiate society. On the land there would have been at least three classes of helots.  There would have been “tenants-in-chief” on the prosperous estates of wealthy (even royal) Spartiates, who retained a large portion of significant revenues from the fertile land. Such helots would probably have been able to build substantial dwellings and to hire household help and additional labor when necessary (harvest etc.) without dividing up the inheritance and so keeping it in tact.  They would probably have lived better than many free men in other societies. (A good example of this pattern is the wealthy serfs of southwest England who built houses hardly distinguishable from the manors of the gentry.)  At the same time there would have been helots on poor, run-down or marginal estates that -- like their Spartiate masters -- were constantly on the brink of failure. Very likely, Spartiate masters living in fear of losing their citizenship or barely able to make agoge fees were harsh masters, constantly trying to squeeze more from the kleros or looking for ways to cheat the helots out of their share.  Finally, at the bottom of rural society would have been the itinerant agricultural workers without homes of their own, who sold their labor by the day or hour,

But, as I pointed out above, helot society was not exclusively rural.  Here too there would have been different strata of helots living very different life-styles.  Many helots, younger sons and sons of landless fathers, who were unwilling or unable to learn a craft would have made a living as attendants to Spartiates or laborers for the Spartan state and army.  Such helots probably lived in barracks, on their employer’s estates, or in small rented rooms, and would have formed a kind of urban proletariat similar to poor craftsmen in Athens and elsewhere.  However, there would also have been skilled craftsmen with workshops and stores.  While some of these might have barely scraped by, living in miserable slums or dark attic rooms rented from their more prosperous neighbors, others – as anywhere on earth – would have had a talent for business and sales. Exceptional craftsmen would have been able to charge more for their goods or found other ways to make money. These would have been able to afford apprentices and even slaves of their own. The more they had, the easier it would be for them to accumulate wealth by investing and lending. Such men, like the privileged “tenants-in-chief” on the kleros, would have lived in comparative luxury and would later be in the position to buy their freedom.

In short, in addition to the oppressed, abused and miserable helots familiar to every student of Sparta, there were also large numbers of comparatively well-off helots, who enjoyed considerable freedom, a reasonable standard of living for their age, and were far from discontented with their lot in life.  These helots were what enabled the Spartan state to function so well throughout the archaic period.