and The Spartan Revoluton

Modern histories of Sparta tend to brush over the Messenian War(s) in considerable haste and without providing a great deal of detail.  The reason is obvious. As Paul Cartledge stresses in Sparta and Lakonia: A Regional History 1300 to 362 BC (one of the few general histories of Sparta to focus seriously on the early history), the literary evidence is almost nil and the archeological evidence ambiguous. Indeed, he describes Tyrtaios, a poet whose works have been handed down to us only in fragments, as the only "reliable" [sic!] literary source, while pointing out that the ancient sources Herodotus and Thucydides refer to only one war.

Yet, arguably, nothing was more important to the evolution of Sparta into a city-state with a radically unique constitution than the Spartan conquest of Messenia.  W.G. Forrest argues, for example, that the conquest of its agriculturally rich neighbor reduced the need for distant colonies and so the interest in the wider world, while the agricultural basis of Spartan wealth reduced Sparta’s interest in industry and trade. Others argue that the conquest of such a vast territory and the subjugation of an entire people resulted in permanent fear of revolt that in turn created the need for a militaristic state. Sparta as we know it – with its unique institutions from the agoge to citizens permanently under arms – is a function of its conflict with Messenia.

The facts of conquest which are undisputed are quickly summarized: Sparta controlled Messenia completely by the start of the 6th century BC. Sometime in the 7th Century, during the life of the poet Tyrtaios, Sparta was engaged in a bitter struggle with the Messenians, a struggle that Tyrtaios clearly describes as one involving pitched battles between hoplites (though not phalanxes). Tyrtaios furthermore refers in his poems to the great deeds of “our father’s fathers,” which is usually interpreted to mean that the initial conquest of Messenia occurred two generations earlier. Tyrtaios also speaks of a struggle that lasts 20 years. Both the references, however, may be purely poetical; the first may mean little more than “our forefathers,” and the latter be a literary device to stress that it was “a long struggle” by making the fight in Messenia exactly twice as long as the conquest of Troy.  Archeologically, we can trace a gradual expansion of Laconian influence into Messenia starting in the late 8th Century.

We also know that in the first quarter of the 7th century BC, Sparta adopted a new constitution attributed to Lycurgus. (I know there has been scholarly debate about the exact dating of the Spartan constitution, but I find W.G. Forrest’s arguments dating the Spartan revolution to the period between 700 and 670 cogent and convincing. See A History of Sparta, 950-192 BC, pp. 55-58.)  Furthermore, we know that Sparta’s only colony was established at the turn or very end of the 8th Century BC, traditionally in 706 BC. Both the introduction of a radical, new constitution sanctioned explicitly by Delphi and the establishment of a colony are attributed by ancient sources to internal unrest in Sparta.

Conventionally, these facts are woven together as follows: Sparta invaded and conquered Messenia in the late 8th Century, subjugating the local Messenian population. This conquest was allegedly followed by a period of intense internal unrest that led, first, to the founding of Sparta’s only colony, and second to the Lycurgan reforms. The later, however, are usually seen as contemporary with Tyrataios and were, therefore, implemented during a second period of conflict with Messenia, usually described as “the Second” Messenian war. If one presumes that Sparta won the initial conflict with Messenia, this can only be explained by a revolt of some kind. So the allegedly brutally oppressed Messenians were within just two generations capable of financing hoards of hoplites and fielding entire hoplite armies.

This taxes my imagination. Periods of intense domestic unrest rarely follow victorious wars – particularly not wars of conquest that have greatly increased the wealth of a state. Likewise, slave revolts do not involve pitched battles between hoplite armies and don’t take two decades to defeat.

The history of modern revolutions shows that revolutions most commonly occur during economic crises or after military defeats. Classical revolution theory says that revolutions occur when a period of rising living standards and expectations ends abruptly in a crisis that threatens recent gains.  If we apply this to the Spartan revolution we get some interesting hypotheses – that square remarkably well with the (scanty) historical record.

What if, following a period of growing prosperity, productivity and population, Sparta’s kings/leadership decided to conquer neighboring Messenia, invaded – and then got bogged down in a terrible war that they failed to win? What if, to obtain/retain support, Sparta’s kings and aristocratic elite promised the poorer and lower classes land in Messenia? What if they then couldn’t deliver on that promise?  What if, as the war dragged on, casualties mounted, and popular support for a lost war waned? What if, the Messenians became increasingly successful and aggressive, bringing the war to Laconia?

Such a situation would have produced all the features of mid-seventh century Sparta that we know existed: the domestic unrest, the calls for a redistribution of land, impetus for the founding of an external colony, and finally readiness to accept a new, revolutionary constitution and lifestyle – as well as the continuing conflict with organized, well-armed Messenian forces.

Furthermore, if Sparta lost the First Messenian War (at least in the sense that it did not obtain its objectives) and it took three generations to subdue the Messenians, then we have a better explanation of why Sparta became a militarized society. Only sustained conflict and perpetual threat could force a society to adapt a system of government that is so singularly focused on ensuring military preparedness at all times.

A first lost war that traumatized Sparta would explain why Sparta responded with unparalleled harshness toward the rebellious Messenians two hundred years later. We need only consider how memories of past wars still shape, for example, British-Irish, or Russian-Polish relations today. I believe it was more likely the trauma of a lost war than an unbroken series of victories by an invincible army sparked the revolution that made Sparta the unique society it was. 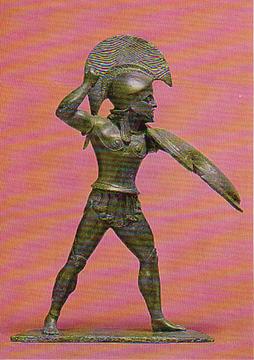