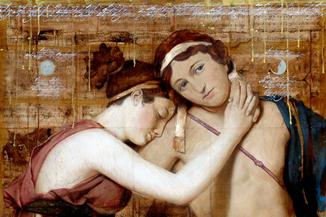 What Homer's Helen Tells Us About Sparta

Raphael Sealey in his study Women and Law in Classical Greece (Chapel Hill: 1990) makes a strong case that the marriage customs and status of women as portrayed in the works of Homer are incompatible with customs in classical Athens. He argues that: “The Athenian and Homeric concepts of marriage are so markedly different that one cannot have developed from the other.” (p. 126)

Sealey furthermore argues that the depiction of Helen in both the Iliad and the Odyssey is not the evil, vain, greedy and sex-crazed Helen of Athenian theater but a dignified princess/queen and a wise woman. In the Iliad, Priam honors her, calling her “dear child,” while Hektor, the paragon of Homeric virtue, shows her courtesy and respect. Most important, Menelaos takes her back to be his Queen. In the Odyssey, Helen is depicted in Sparta apparently enjoying the respect of the entire population and providing wise advice to her husband. It is striking that such a portrayal of Helen is consistent with Spartan tradition, where Helen was honored alongside Menelaos, temples were built to her and an annual holiday was celebrated in her honor.

One particularly intriguing aspect of the Helen portrayed by Homer in the Odyssey is that she, like Gorgo, is shown to be cleverer than the men around her! She is the first to recognize Telemachos (Odyssey 4:138:32), and it is Helen who deciphers the significance of an eagle carrying a goose (Odyssey 15:160:78).

This begs the question if Homeric traditions with respect to women had a stronger influence on Sparta, particularly Archaic and pre-revolutionary Sparta, than they did on Athens. Is it possible that Doric traditions generally owed more to the world described in the works of Homer than did Ionian traditions? Admittedly, we do not know just what society the Iliad and Odyssey actually describe and many argue that the world of Homer, like Homer himself, is completely fictional. Yet repeatedly, archeological evidence has come to light that verifies elements of the great epics previously dismissed as “fiction” (e.g. helmets with boars tusks).

We know that women in Sparta enjoyed exceptional freedom and status compared, particularly, to women in Athens. While this difference is traditionally attributed to the laws of Lycurgus, it is unreasonable to presume that something as fundamental as attitudes toward women would change over night. It is far more likely that women in Sparta already enjoyed higher status and that the revolution in Sparta that followed the First Messenian War only codified, institutionalized and developed to new levels pre-existing tendencies. The fact that Cretan women, Achaian women and women in Gortyn also had notably more freedom and status than women in classical Athens is further evidence that at least in Doric societies there was a wider, pre-classical tradition which contrasted sharply to the misogynous practices and laws of classical Athens.

It would be interesting to know if Doric traditions differed markedly to Ionic traditions in other spheres as well – and equally intriguing to investigate to what extent (if any) Ionic traditions were influenced by Asiatic customs. Is it possible that Athenian misogyny had more to do with the influence of the East – of Babylon and Persia – than with the roots of Greek civilization? Was Sparta’s comparatively greater respect for women perhaps more genuinely “Greek/Hellenic”?