Spartan dress and decoration differed from that of the rest of the Greek world sufficiently to provoke comment among ancient observers.  At the same time, Spartan dress remained essentially Hellenic.  The Spartans did not wear clothing fundamentally different from other Greeks, they were simply more conservative in the adoption of new styles, meaning that they retained archaic fashions, such as the peplos and long hair for men, long after Greeks from other cities had adopted new fashions.  When one considers the fact that new fashions were introduced primarily from Persia and Macedonia, than it is fair to say that Spartan dress was more purely “Greek” or “Doric” than the fashions of Athens.

The most obvious example of the conservative character of Spartan dress was the preference of Spartan women for the old-fashioned peplos, even after Greek women elsewhere had adopted the long chiton.  The peplos is the robe worn by almost all archaic kore, and these archeological models refute modern allegations that Spartan women went around in short skirts like Amazons. The ancient complaint that Spartan women were “thigh-throwers” did not refer to skirts or chitons so short they revealed a woman’s thigh, but rather to the fact that a woman wearing a peplos was very restricted in her movements – unless the side seam was opened to above the knee. Thus, while Athenian women in their looser cut long chitons could walk vigorously without revealing their legs, their Spartan sisters always showed some leg when they walked.  The characteristic Spartan bronzes that show a girl in a short skirt running or dancing do not depict mature Spartan women but rather girls; the most likely interpretation is that they depict girls in the agoge, and as such girls before puberty.

Another typical Spartan fashion that dated back to at least the archaic age was for men to wear their hair long. However, modern depictions of Spartans as shaggy, unkempt men with scrawny, chest-long beards and wild, tangled hair hanging to their shoulders (alà Richard Hook’s illustrations in Osprey’s The Spartan Army) are not supported by ancient sources. A statue fragment found in the heart of Sparta and dating from the early fifth century (commonly – or affectionately – referred to as Leonidas) shows a man with a clipped beard and neat hair. Earlier archaic artwork unanimously shows men with short beards and long, but very neat, “locks” of hair. (Note, for example the hoplites on the magnificent frieze of the Siphnian Treasure at Delphi dating from Leonidas’ lifetime, the Krater of Vix and other figures of known Laconian origin displayed now in the Museum of Ancient History in Berlin or pictured in Conrad Stibbe’s Das Andere Sparta.)

Likewise, I reject emphatically descriptions such as those of Otto Lendle, who describes Spartans as stinking, filthy and slovenly. These images likewise contradict the historical record and existing archeological evidence. Herodotus makes a great point of how the Spartans groomed themselves before Thermopylae, for example, and no one would be tempted to stress the beauty of Spartans  -- as Plutarch explicitly does -- if they had been repugnant for their lack of grooming and cleaning. Plutarch also claims Spartan men took particular care of their hair especially in the face of danger, and refers to an alleged quote from Lycurgus that long hair was preferred because it rendered a handsome man better looking, and an ugly one more frightening.

The later quote suggests, of course, that while a handsome man might have groomed his hair assiduously, an ugly man might have consciously ratted his, but this hardly makes sense if one considers the need for a man to wear a helmet, as all Spartans did until they had reached the age of 61.  It is more likely to refer to the fact that hair braided back from the forehead tends to give the face greater prominence than a crown of curls such as other Greeks wore in the classical period.  Thus, while both a handsome and an ugly Spartan wore their hair neatly braided from the forehead, the effect was to highlight the good features of the former and the bad features of the latter. I would note further, that anyone familiar with African hair braiding knows that a great deal of variety, and so different effects, can be achieved without breaking the fundamental concept of long hair, neatly braided from the forehead. I like to imagine that Spartan dandies shocked and irritated their conservative elders by obeying the letter of the law (long, neatly groomed hair) while nevertheless developing individual styles.

I would also like to note that no ancient source claims that Spartan women did not adorn themselves.  On the contrary, in Euripides’ plays and Aristotle’s political commentary both, Spartan women are despised and castigated for being exceptionally vain, luxury-loving and self-indulgent. Thus, while Spartan men are portrayed as (stupidly) restrained and austere, Spartan women are loathed for being even more fond of self-adornment than their Athenian counterparts, who are themselves viewed as excessively fond of cosmetics, perfumes and jewels.

This suggests that even if, as some argue, Spartan laws prohibited not only the use of gold and silver currency but also gold and silver objects d’art, than Spartan women found other means of adorning themselves. One option would have been to make jewelry from other materials – ivory, copper, bronze, lapis lazuli, jade, coral, amber etc. etc.  In addition, the garments could have been decorated with bright colored embroidery or borders with beads of bronze, copper, ivory etc. Alternatively, the peplos themselves might have been made of brightly colored fabrics.  The most precious purple dye was produced from muscles found in the Gulf of Laconia, and Lacedaemon undoubtedly exported this dye and/or fabric stained with it.  Other important dyes, such as indigo, were also produced in Lacedaemon.

Anthropology, archeology and art history show us that there is almost nothing as universal as human vanity. Throughout history and throughout the world, men and women have been astonishingly inventive in developing ways to adorn themselves and make themselves appealing to one another.  Sparta, a society far closer to our own than many others the world has known, was certainly no exception. 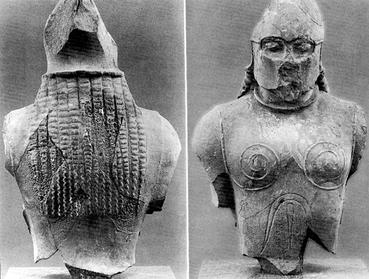