Sparta, like most other cities in ancient Greece, initially followed an aggressive policy towards her neighbors.  In two lengthy and bitter wars in the late 8th and early 7th century, Sparta subjugated its western neighbor, Messenia.   Exhausted from this struggle, Sparta thereafter sought more subtle means of hegemony.

When, during the mid-6th century, Sparta came into conflict with its northern neighbor Tegea and suffered a humiliating defeat, Sparta made the – at the time astonishing – decision to seek not a temporary but a permanent peace.  This remarkable initiative is attributed by ancient sources to a certain Spartan citizen, Chilon, whose reputation for wisdom was so great that he was regularly counted among the "7 wise men" of the ancient world.  Chilon is credited with the famous sayings carved in stone at Delphi: "Know thyself" and "Everything in moderation" (sometimes translated as "Nothing in excess").  Both sayings suggest that recognition of Sparta's limited resources induced a change in foreign policy at this time.

The complete victory over Messenia had created a constant internal threat in the form of a subject population not reconciled with its status and so possibly planning a revolt.  The treaty of nonaggression and mutual support negotiated with Tegea not only prevented an expansion of the problem posed by the threat of Messenian revolt, but bound the Tegeans to provide support to Sparta in the event that the Messenians did rebel.  After this precedent had been set with Tegea, Sparta went on to make similar treaties of mutual defensce with a series of other cities on the Peloponnese.  (My novel The Olympic Charioteer  describes the conflict with Tegea and the founding of the Peloponnesian League.)

By the second half of the 6th century, Sparta's sphere of influence stretched from Sicily and Africa to Persia, and it was in this period that Sparta won a reputation as the bulwark of democracy against tyranny.  Plutarch claims, for example, that Sparta was instrumental in deposing the Cypselids in Corinth, Lygdamis of Naxos, Aeschines of Sicyon, Symmachus of Thasos, Aules of Phocis, Aristogenes of Miletus, and Aristomedes of Thessaly.   Certainly, the Spartans were instrumental in driving Hippias out of Athens.  Modern historians have questioned this list, but admit that there had to be some basis for Sparta's reputation as the nemesis of tyrants.  They also suggest that the motivation for these interventions was the tendency of tyrants to ally themselves with Persia – something which effectively turned Spartan foreign intervention in the internal affairs of other cities into preventive self-defense.  Another explanation, of course, is that the tyrants tended to be populist leaders who catered to the mob.  As such, they were viewed as more dangerous to the conservative Spartans than democracies dominated by aristocratic elites.

A combination of military and diplomatic successes made Sparta the most powerful city-state in Greece in the second half of the 6th century.  This position of preeminence induced many foreign powers to seek Spartan support for their own objectives.  King Croesus requested Spartan aid in the mid-6th century, and during the reign of Cleomenes I (520-490), Sparta received requests for aid from Samos, Scythia, Athens, and Miletus – all of which were, surprisingly, turned down. Despite its active foreign policy on the Peloponnese and to a limited extent north of the Isthmus of Corinth, Sparta recognized the limits of its own power and avoided military entanglements too far from home.  Thus, when a number of Greek vassal cities in the Persian Empire rose up in revolt in the first decade of the 5th century, Sparta again refused to send aid.  Failure to support the Ionian revolt can be seen as callous or even unpatriotic.  However, it reflected the fact that at this time Sparta effectively had no fleet, and so no way of supporting a war on the other side of the Aegean.

While Sparta failed to support the Ionian uprising against Persia, Sparta nevertheless demonstrated consistent and passionate opposition to Persian designs on mainland Greece during this period. Sparta made itself ridiculous – in the eyes of the powerful Persian monarchs – by warning them against enslaving Greeks.  The Persian Great King, as the master of an empire stretching from modern India to modern Turkey, had never heard of Sparta.  He asked who these people were who dared "warn" him.  He was even more astonished to learn that they came from a city-state that controlled only a portion of the mountainous peninsula of the Peloponnese.  When the Persians later sent ambassadors demanding submission to Persia, the Spartan Assembly responded by throwing the ambassadors in a well – an unprecedented breach of diplomatic immunity.  When the invasion of mainland Greece finally came, Sparta was elected by the informal alliance of anti-Persian cities to take command. Sparta sent one of her own kings, Leonidas, with an advance guard of three hundred citizens and larger contingents from other members of the anti-Persian alliance, to try to halt the invasion at the pass of Thermopylae.  When a traitor betrayed their position, King Leonidas released the other allies to return to their homes; but he and his Spartans, supported voluntarily by 700 Thespians, remained in position and died to a man in a gesture of commitment. (Read more about Leonidas.)  Less than a year later, Sparta fielded an army composed of what must have been every able-bodied man in the city-state and sent it north of the Isthmus – a significant fact because it demonstrated Sparta's commitment to defend all of Greece and not just the Peloponnese.  This army met the significantly superior Persian land forces still threatening Greek independence despite the defeat of the Persian fleet at Salamis the previous fall.  Together, the Spartans and Athenians, under Spartan leadership, managed to defeat the much larger Persian forces and end the direct threat of Persian invasion.

In addition to this defeat of the Persian Empire, the beginning of the 5th century saw two other key developments.  First, although Sparta initially dominated the Peloponnesian League, sometime in the reign of Cleomenes I (520-490) the other League members, led by Corinth, forced a revision of its structure that gave each member of the League, Sparta included, an equal voice.  Thereafter, Sparta required the consent of the majority of League members to take the League to war.  In short, by the 5th century, the Peloponnesian League was no longer a Spartan empire disguised as a league, but a genuine alliance system.

The second key development was the rise of Athens.  Only by cooperating had Sparta and Athens succeeded in banishing the threat of a Persian invasion during the period 490 to 479; however, Athens benefited more than Sparta from the victory over Persia, because it opened up the Aegean to Athenian trade.  Athens first set up a defensive system of alliances with the cities in the Aegean with an anti-Persian agenda, called the Delian League.  However, Athens' ambitions grew with her successes, and soon Athenian policy became aggressively expansionist.  While the Peloponnesian League had started as one dominated by a main power and evolved into something more democratic, the Delian League turned from a genuine alliance into an instrument of oppression.  The members were required to pay tribute to Athens or suffer draconian disciplinary action; revolts against Athenian domination started to occur.  A conflict between the old (Sparta) and new (Athens) dominant powers was inevitable.  Nevertheless, the conservatism of Sparta's 5th-century foreign policy is reflected in the fact that Sparta was extremely reluctant to move against Athens – despite rising pressure for support from the city-states chafing under Athens' increasingly oppressive policies.  Effectively, its allies in the Peloponnesian League pushed Sparta into the drawn-out and crippling war we know as the Peloponnesian War.

Sparta went to war reluctantly, and with the clear statement that Athens could prevent hostilities if Athens would "let the Greeks go free".  But soon the war had taken on a life of its own.  The dead of early battles and the humiliation of early defeats fed hatred and fanaticism.  The long, drawn-out war brutalized both societies.  Athens slaughtered the entire male population of the neutral city of Melos in 417, taking the women and children back to Athens as chattel slaves – a fact that did not prevent them from hypocritically calling Spartan treatment of Messenians harsh.  Two years later, Athens embarked on a completely unprovoked invasion of Syracuse, while routinely executing her own generals and politicians for imagined failures.  Sparta's population went into dramatic decline, its exports choked under an Athenian blockade, and xenophobia seized the body politic.  By the time Sparta finally won the Peloponnesian War, it bore little resemblance to the Sparta of Chilon or Leonidas.  The hardships and bitterness of the war had brutalized Spartan society, crushed its creativity, and turned it into a mere caricature of its former glory.  Overextended, its few remaining citizens soon found that the temptation to abuse power was too great even for Sparta's vaunted discipline. 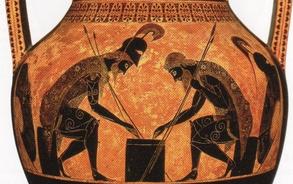 NONAGGRESSION PACT, DEFENSE OF
DEMOCRACY, AND DEFIANCE OF PERSIA