The most remarkable thing about Gorgo, wife of King Leonidas I of Sparta, is that we know anything about her at all. Herodotus and other ancient Greek historians are far more likely to mention Persian queens than the wives of Greeks – not because Persian women were more powerful than their Greek counterparts but because Persians had several wives and so it was sometimes useful to record by which of them a certain Persian prince had been born. Since Greeks had only one legitimate wife, there was no need for such clarification when it came to prominent Greek citizens. Even the names of Sparta's Queens are rarely mentioned. We do not know, for example, the names of either Leonidas’ mother or his step-mother, the “second wife” who caused all the trouble in the Agiad family in the second half of the 6th Century BC.

The near complete absence of Greek women in ancient history (as opposed to Greek mythology and drama) is a function of the fact that ancient historians were predominantly Athenian males from the Classical or Hellenistic Periods. Athenians of these periods did not think women should be seen - much less heard – in public. Women had no public role and so no business in politics or history. As Pericles said in one of his most famous speeches, “the greatest glory of a woman is to be least talked about, whether they are praising you or criticizing you.” (Thucydides, History of the Peloponnesian War, 2:46.) Gorgo was by that standard a hopeless piece of scandal.

The first time she is recorded opening her mouth, she was already interfering in the affairs of state. She told her father to send away the powerful tyrant Aristagoras, who requested Spartan military aid for his planned rebellion against Persia. Gorgo’s father, King Cleomenes, had already told Aristagoras that his proposal was “improper” and asked him to leave Sparta, but Aristagoras then started to offer Cleomenes bribes. As these became ever larger, Cleomenes appeared to be weakening until his daughter intervened, saying: “Father, you had better go away, or the stranger will corrupt you.”

Gorgo allegedly offered this advice at the tender age of “eight or nine.” Even if, as there is good reason to believe, Herodotus exaggerated her youth to make her father seem foolish, it would be hardly less remarkable if a maiden of 18 or 19 did what Gorgo did. In no other Greek city but Sparta would a female of any age have been allowed to be present much less heard and heeded at a meeting between Heads of State.

Gorgo’s advice was all the more remarkable because it was good. It was Athenian aid for the Ionian revolt that brought the wrath of Persia down on mainland Greece. This led some people to quip that it was easier to bamboozle thirty thousand Athenian men than one Spartan girl. Ironically, had the Athenian Assembly been as wise as Gorgo, then Gorgo might not have been widowed twenty years later by the Battle of Thermopylae.

Perhaps the fact that she was genuinely and exceptionally bright explains why as a wife too she was consulted and her opinions respected. This is evidenced by the incident in which a blank wax tablet was sent to Sparta from the exiled king Demaratus then at the Persian court. “No one,” according to Herodotus, “was able to guess the secret until… Gorgo, who was the wife of Leonidas, divined it and told the others that if they scraped the wax off, they would find something written on the wood underneath. This was done; the message was revealed….(Herodotus, The Histories, 7:239.)

There is little doubt that Gorgo was clever, but what else do we know about her?

It is probably safe to say that Gorgo was not particularly pretty. Had she been, it would have been mentioned by somebody. The beauty of other Spartan women, notably Helen and Demaratus’ mother, is legendary or at least recorded. Some people have suggested Gorgo was ugly based on her name which conjures up the mythical Gorgon, a female beast with snakes for hair so hideous that all who looked at her turned to stone. But this seems to be taking things too far in the other direction. It is hard to imagine a truly ugly woman being so well-loved by either her father or her husband – or so well adjusted and self-confident. Furthermore, we are told that men “made advances” to her, which also seems inconsistent with an unattractive woman. Gorgo was probably simply “ordinary,” and so her looks were not worthy of comment.

Whatever her looks, Gorgo was the quintessential Spartan woman in spirit. She was educated, self-confident, out-spoken and involved in the body politic. She was neither vain nor materialistic. She showed Spartan scorn of affectation when she thought Aristagoras had no hands because he let a slave dress him, and when she accused an elegantly dressed man of not being able “to play even a female role.”

This second quote is again very telling because it suggests Gorgo was familiar with theatre – something an Athenian woman would almost certainly not have been. Athenian women were not supposed to be seen or talked about. It was a disgrace for them to be seen even standing in the doorways of their houses much less at the market place. How then should they have been tolerated in the crowds that attended Athenian theater? While it is just possible to imagine them (veiled and heavily escorted by their male relatives) attending tragedies, the sexual explicitness of Athenian comedies is utterly unimaginable if respectable Athenian women were expected to be in the audience. Gorgo’s reference to “playing a female role,” however, makes it very clear that she had seen plays performed.

There is even a chance that she saw these plays performed in Athens. We know that Leonidas’ short reign began with the Persian invasion that led to the Battle of Marathon and ended with the Persian invasion that crushed him and his 300 at Thermopylae before continuing on to burn Athens to the ground. In short, Leonidas’ entire reign was dominated by the Persian threat and the need for the Greek city-states to unite against the common enemy. It is therefore reasonable to postulate that Leonidas spent a good deal of his time lobbying for support in the other important cities especially Athens. The very fact that he was elected the commander of the coalition forces including nominal command of the Athenian fleet suggests that leaders in other cities were familiar with – and trusted - him. It is not fanciful to hypothesize that on at least one of his trips to Athens, he took Gorgo with him.

The evidence that Gorgo traveled to Athens is further corroborated by her most famous quote. An Athenian woman is said to have asked her why “only Spartan women rule their men.” Since it is inconceivable that an Athenian woman would have traveled to Sparta, the only place where such an exchange could have taken place was in Athens itself.

The thought of Gorgo in Athens is rather like the Connecticut Yankee in King Arthur’s court. She must have been a sensation – and one imagines Leonidas with his dry sense of humor enjoying every minute of it! For example, note that the Athenian woman asked why only Spartan women “ruled” their men, implying that Gorgo had been seen giving Leonidas advice – and he had been seen to accept it, just as Cleomenes had done before him.

Gorgo’s response makes clear that the willingness of Spartan men not to discount good advice just because it came out of the mouth of a woman is what made Spartan men more manly – at least in Gorgo’s eyes! Understandably, perhaps, Spartan men, who measured their virility on the battlefield more than in the debates of the Assembly as in Athens, were less worried by the words of women.

But we should not picture Gorgo as a shrew. Gorgo’s role was that of advisor, companion and lover. She is not depicted telling Leonidas off (as she did her father), but rather helping him solve the mystery of the apparently blank wax tablet and obliquely bragging about his masculinity. And while other Spartan queens (notably Helen) are accused of adultery, Gorgo is portrayed rejecting unwanted advances. She was the mother of at least one child by Leonidas, his son and heir, Pleistarchos, and there is no reason to believe this was their only child. The fact that Pleistarchos was still very young at his father’s death suggests the opposite: that there had been elder children who died or had all been female.

When Leonidas marched out to die at Thermopylae, Gorgo asked him for instructions. His answer was a final compliment to her. He said: “Marry a good man and have good children.” Not sons, children. Leonidas wanted Gorgo not to mourn him but to be happy, and he valued daughters as much as sons – probably because he had learned from Gorgo the importance of clever and loyal women. 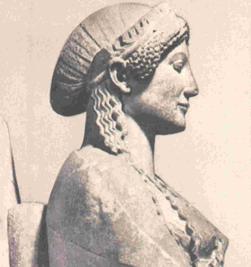