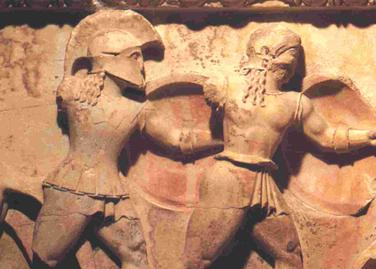 Sparta's War with its northern Neighbor

Herodotus records that sometime before the Persian invasion and probably in the mid-6th Century BC as we reckon time, the Spartans became restless and wanted to conquer their northern neighbors in Arkadia. As the Spartans were wont to do, they sent to Delphi for advice and received the following oracle:

Arkadia? Great is the thing you ask. I will not grant it.
In Arkadia are many men, acorn-eaters,
And they will keep you out. Yet, for I am not grudging.
I will give you Tegea to dance in with stamping feet
And her fair plain to measure out with the line.

Taking this to mean that they would be successful, the Spartan army invaded Tegea only to suffer a devastating defeat. As Herodotus explains: “…and those who were taken prisoner were forced to wear on their own legs the chains they had brought, and to ‘measure out with the line’ the plain of Tegea as labourers. In my own lifetime the fetter they were bound with were still preserved in Tegea, hanging up round the temple of Athene Alea.” (Herodotus, The Histories, Book 1, 66)

Although Herodotus does not tell us just how many Spartiates were killed or captured, it is clear that Sparta was both defeated and that a significant number of citizens surrendered. (Incidentally demonstrating that Sparta did not have any kind of a “do or die” mentality at this time!) Indeed, Herodotus suggests that Sparta suffered more than one defeat saying they “continually” had the worst of it against Tegea and “a long series of reverses” until the reigns of Anaxandridas and Ariston. These kings certainly lived in the second half of the 6th century and under their leadership Sparta sent for a second oracle from Delphi.  This told them:

In Arkadia lies Tegea in the level plain,
Where under strong constraints two winds are blowing;
Smiting in there and counter-smiting, and woe on woe;
The earth, the giver of life, holds Agamemnon’s son.
Bring him home, and you will prevail over Tegea.

At this point a clever Spartiate, Lichas, learned that a smith in Tegea had discovered a coffin ten feet long with a skeleton inside that was just as large. Interpreting this as the body of Orestes, Lichas reported what he had heard to the Gerousia. The Spartans pretended he had committed some crime and exiled him. He returned to the forge, explained what had happened and leased the plot of land with the bones. In secret he then dug up the bones and brought them back to Sparta, and, according to Herodotus, “ever since that day the Lacedaemonians in any trial of strength had by far the better of it.”
But that is only half the story, for -- despite having recovered what was believed to be Orestes’ bones -- Sparta refrained from launching a new war against Tegea and negotiated a non-aggression pact instead.
Why? Herodotus is silent on this, so we are left to speculate.

We know is that Sparta opted to negotiate with Tegea rather than to resort to arms. We also know that the resulting “non-aggression” pact became to pro-type of all subsequent agreements with other cities in the Peloponnese, and so the core of the Peloponnesian League. We also know that a key feature of this agreement was that Sparta agreed to assist Tegea against external enemies (presumably they were thinking of Argos), but also that Tegea agreed to assist Sparta against internal revolts. This suggests that recognition of the threats inherent in a large subject population may have induced Sparta to seek an alliance in place of conquest. A number of historians point out that the Tegean conflict probably fell in the life-time and possibly the ephorate of Chilon the Wise, and postulate that this universally respected Spartan leader may have been the voice of reason that held Sparta back from new aggression.

The course of history: the attack, defeat, new appeal to Delphi, successful re-location of “Orestes” and then the astonishing restraint demonstrated by Sparta in not attacking again suggest that Spartan society was probably divided between “hawks” and “doves.” Far from being a monolithic society with a single will and a robot-like population, Sparta was a complex society inherently vulnerable to internal division by the peculiar institution of the dual kingship. Since the Kings were equal in all things, any fundamental policy differences between the kings led inevitably to political strife. Each king could be assured support from his own relatives, friends and clients in both the Gerousia and Assembly. This means that each king would seek to win majorities by various means of persuasion and the same kind of political maneuvering we are familiar with today in the U.S. Congress and British Parliament. The “hawks” won the first round; the “doves” – very probably led by Chilon the Wise – won the second round.

The above hypothesis is the basis for my novel The Olympic Charioteer. The novel opens in Tegea, after Sparta’s defeat. In the absence of any historical record about the political system in Tegea at this time, I have used Tegea to portray one of the characteristic political developments of the period: the rise of tyrants on the backs of increasing political demands by the hoplite-class against the aristocratic elite. The novel moves from Tegea to Sparta, where the internal divisions between two factions in Sparta are revealed. The central character of the novel is one of the Spartiates taken captive in the Spartan defeat: a young man, who just before the start of the war had driven his father’s chariot to victory at the Olympic games.