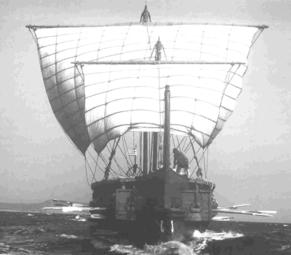 The VIctor of Artemisium: A Spartan Admiral

In 480 BC, the Persian invasion of Greece was confronted at sea by a rag-tag fleet composed of 271 triremes and 16 penteconters. Although the bulk of this fleet (147 triremes) was built in Athens, the command was entrusted to a Spartan, Eurybiades, son of Eurycleides. According to Herodotus, this was because “the other members of the confederacy [against Persia] had stipulated for a Lacedaemonian commander, declaring that rather than serve under an Athenian they would break up the intended expedition altogether.” (The Histories: Book 8:2)

Herodotus rightly stresses the refusal of the allies to accept Athenian command, and this undoubtedly had historical reasons. Athens was not a significant sea power in the 6th century BC, and it did not build its massive fleet until after the discovery of silver in Laurium in 483 BC. In short, in 480, Athens was a parvenu naval power. The naval powers of the 6th Century, Corinth and Aegina, both had good reason to be wary of Athens. Aegina and Athens had been involved in an undeclared war for more than a decade, while Corinth and Athens were manufacturing centers that increasingly competed in trade. It is not, therefore, surprising that these and other cities rejected Athenian leadership. Noteworthy is that they wanted a Spartan commander. After all, Corinth provided the second largest contingent of ships (40 triremes) and four-times as many as Sparta’s modest if respectable contribution. Corinth, with a long history of naval power and such significant number of ships, could have claimed command for itself.

That Corinth instead requested a Spartan commander cannot be dismissed as mere subservience to Sparta. Corinth was the city that had forced Sparta to break-off an invasion of Attica and ended Sparta’s ability to take the Peloponnesian League to war without the consent of all members. Corinth was an ally of Sparta, not a vassal-state or satellite. That Corinth joined other allies in insisting upon a Lacedaemonian commander, therefore, suggests that the demand was more than anti-Athenian and not merely pro-Spartan; it indicates that Sparta was considered a naval power capable of providing competent leadership at sea.

We know that Sparta conducted a campaign against Samos in the last quarter of the 6th Century which required considerable naval power in the form of transports and fighting ships to defend those transports. In addition, Cleomenes’ first attempt to depose the Athenian tyrant Hippias also entailed naval capability since the Spartan task force was landed at Phalerum. Theoretically, these earlier naval expeditions could have been conducted with perioikoi ships and crews, but Herodotus explicitly tells us Eurybiades was Spartiate. Furthermore, in Herodotus’ list of ship contingents to the battles of Artemisium and Salamis, he makes a notable distinction between ten “Spartan” ships at Artemisium and sixteen “Lacedaemonian” ships at Salamis. This implied that ten ships were financed and at least officered by “Spartans,” whereas the sixteen ships at Salamis included an additional six ships provided and manned by perioikoi. Significantly, one year later, King Leotychidas led a naval expedition, demonstrating that naval command was not ipso facto beneath the dignity of Sparta’s kings. In short, at least some Spartiates at the start of the 5th century BC, most notably Eurybiades, had obtained naval experience and demonstrated competence at sea.

Contrary to popular opinion, there is no evidence that Eurybiades was a mere figurehead. While Eurybiades was not originator of the winning strategies (all of which are attributed to Themistocles), Herodotus makes it clear that Eurybiades support was essential for the implementation of Themistocles plans. Eurybiades commanded enough respect to be obeyed once he made up his mind, which would not have been the case if his position had been purely nominal.

The two instances in which Eurybiades opposed Athenian wishes/suggestions highlights his very real power. At Salamis, the position of greatest honor was given to the Aeginans, to the disgruntlement of the Athenians. While Athens had every reason to feel that they deserved pride of place because they provided half the fleet and had lost their city, Eurybiades’ decision was the right one for the commander of a multi-national force. Athens was going to fight regardless, but Eurybiades had to retain the loyalty and morale of the smaller contingents that resented Athenian dominance. Aegina’s was an important naval power with a significant contingent of triremes. By honoring Aegina, Eurybiades effectively prevented the smaller allied contingents from falling away or losing heart at a very critical moment.

Even more significant is Eurybiades’ role in preventing a fool-hardy destruction of Xerxes’ bridge across the Hellespont. The Persian fleet withdrew across the Aegean after the battle of Salamis. The victorious Greeks, waking up on the day after the Battle to find the Persian ships gone, gave chase. They reached the island of Andros without even catching sight of their quarry and stopped to consult. Themistocles at once proposed sailing north to destroy the bridge across the Hellespont by which the Persians had entered Greece and would need to retreat. Eurybiades wisely pointed out that trapping the undefeated Persian army in Greece was the last thing that the Greeks wanted! (This was before the battle of Plataea, and Persian land forces were only marginally weakened by the brief delay at Thermopylae.) Without an escape route, the Persians would have no choice but to lay waste to all Greece, using their superior numbers to slaughter everything in their path. The fact that Themistocles could even suggest such a course of action will not have endeared him to the men from cities other than Athens that had not already been raised to the ground. Certainly, Eurybiades was supported by all a majority of those voting and the plan was abandoned.

This was Eurybiades last significant act. Herodotus records that he was honored, along with Themistocles, in Sparta for his role in defeating the Persians at sea. Then he disappears from history. So what do we know of him?

In Herodotus, Eurybiades serves primarily as a foil for Themistocles. Themistocles is the intriguer. He is constantly seeking and taking bribes, he sends secret messages to Xerxes, he takes credit for ideas that are not his own. Themistocles is depicted as a brilliant tactician and a gifted orator (something Athenians particularly admired), and he saves Greece. But as Herodotus portrays him, he is a shady character nevertheless.

Beside Themistocles, Eurybiades is an almost featureless shadow. At Artemisium, Herodotus claims he took a bribe from Themistocles to stop him from ordering the fleet to withdraw. Yet according to Herodotus, Themistocles was himself bribed by the local inhabitants. Given the fact that this was at the very moment when Leonidas was making his unequivocal stand at Thermopylae, I personally find it almost inconceivable that Eurybiades ever considered retreat. After Thermopylae fell and Artemisium was militarily worthless, yes, but not before. Some of the other contingents might have been in a panic (so were many of the other Greeks who fought with Leonidas) but Eurybiades is unlikely to have any less steadfast that Dienekes and company. In short, like Themistocles himself, it seems more likely he took the money but never had any intention of retreating anyway.

Otherwise, Herodotus depicts him diligently consulting with the commanders of the various contingents, calling conferences to discuss the course of action, and hearing everyone out before taking a decision. He appears to have been scrupulously respectful of the independence and rights of all the allies, and to have kept Athens from diplomatically dominating the alliance. Once a decision was made, however, he acted decisively and commanded the respect of all involved – including the Athenians. His performance at sea is not singled out for special praise, but he positioned the Lacedaemonian ships in the middle of the line, where, as admiral, he would have the best overview.

The fact that he disappeared from history after this short moment of glory in 480 hints at one last characteristic: Eurybiades was no Pausanias and no Lysander, who turned his military success into a political agenda. He appears to have faded again into the anonymous ranks of the Spartan line, but his successful foray into history suggests that Sparta had greater naval competence than is widely recognized and foreshadows Sparta’s victory over Greece’s greatest naval power a half century later – at sea.