It has become fashionable to denigrate the memory of Leonidas by associating him with suicide bombers (Cartledge) or by accusing him of murdering his brother. Thus Dr. Nic Fields in Thermopylae 480 BC: Last stand of the 300 dismisses Herodotus’ version of King Kleomenes’ death on the grounds that “the Spartans were notoriously abstemious” and concludes instead that: “It seems more likely that Kleomenes’ reign was cut short [sic] by murder, arranged and hushed up, on the orders of the man who succeeded him on the Agiad throne.” (p. 14)

There are a large number of problems with this thesis.  First and foremost, of course, is that there is not a shred of historical evidence for it.  Not one ancient source accuses Leonidas of fratricide.  Herodotus, as Fields notes, has a completely different version of events. So we are talking about nothing more than a modern commentator’s fabrication.

Fields feels justified fabricating this story because, according to him, all Spartans (every last single one of them over hundreds of years) were “abstemious” and since none ever drank in excess, a Spartan king who drank too much is a historical (physical?) impossibility. Frankly, that’s a little much. Even Spartans were human beings, and human beings are fallible.  Furthermore, we are talking here about one of Sparta’s kings. Even if one could argue that peer pressure on an ordinary citizen would have been too great in Sparta’s overweening society to ever allow anyone to deviate too far from the norms, a Spartan king clearly did have more leeway. The fact that Herodotos mentions the Spartans blamed his madness on his drinking habits underlines the facts that Kleomenes’ behavior was not considered normal in Sparta. Spartans as a rule were abstemious, Kleomenes was not. Fields’ argument is untenable.

Of course, Fields is not the first historian to conclude that the hero of Thermopylae was really a murderer on the run. Most accept the fact that Kleomenes might have had a drinking problem, but cannot believe that anyone would try to flay themselves alive.  Because they cannot imagine something so appalling and hence cannot accept Herodotus at face value, they feel justified in accusing Kleomenes’ successor of regicide, fratricide and patricide (since Kleomenes was not only Leonidas’ king, but also his brother and father-in-law) all at once.

Yet, as W. G. Forrest points out in his excellent, concise work A History of Sparta: 950 – 192 BC : “A recent psychological study has pointed out that the details of [Kleomenes’] final self-mutilation are in fact consistent with a paranoid schizophrenic suicide.”

As so often, the evidence is with Herodotus – not those, who lack the imagination to believe him.
Yet even if we were to dismiss Herodotus’ version of Kleomenes’ death as implausible, would that justify pointing the finger at Leonidas?

W. P. Wallace in his excellent article, “Kleomenes, Marathon, the Helots, and Arkadia” (The Journal of Hellenic Studies, Vol. 74 (1954), pp. 32-35), suggests some plausible reasons why the Spartan state might have wanted to rid itself of Kleomenes.  Wallace presents some weak but nonetheless cogent evidence that an Arkadian league formed at about this time and Herodotus also speaks of Kleomenes stirring up trouble in Arkadia.  Wallace argues that if Kleomenes was being successful in turning some of the Arkadian states against Sparta, than the Spartans may have felt he had to be taken out of circulation once and for all. But even this does not justify putting the blame for any surreptitious regicide on Leonidas.

People, who subscribe to this theory, argue that because Leonidas succeeded to the throne, he had to have the most to gain from murdering his brother, and so he must have been the man behind it.  But Leonidas was Kleomenes’ heir at the latest from the day his elder brother Dorieus died, possibly from the day Dorieus departed Sparta. Why would he have waited almost 40 years until he was over 50 years of age to suddenly become ambitious and covet his brother’s throne? Did he, after serving Kleomenes almost his entire life, suddenly turn against him because of “troubles” in Arkadia? Surely Kleomenes had made other, more dramatic blunders, from Athens to Argos, that would have given him a pretext for murder -- had he been so inclined. But we hear nothing of Leonidas being disloyal after Kleomenes’ earlier debacles.

Another thing I would like to know from those who charge Leonidas with murder is what Gorgo was doing while her husband murdered her father? Gorgo, of all Greek women, is known for being out-spoken. Are we to believe that she just stood by and let her husband kill her father without a word of protest? More: that after her husband murdered her father, she continued to be a loyal wife, assisting him and asking for his instructions as he marched out to his death?  Surely, the woman, who as a child had told her father not to take bribes, would have gone on record protesting her father’s murder and then avenging his death or scorning the murderer? (Think of the wrath of the Spartan princess Kleitamestra!)

Or are we to believe she was an accomplice? That she supported her murderous husband like some ancient Lady MacBeth?

If so, someone needs to provide an explanation of why Kleomenes’ only child and heir, evidently greatly favored by him as a child, suddenly wanted him murdered in a barbaric fashion. Trouble in Arkadia hardly seems a sufficient reason for such an appallingly unnatural sentiment. Indeed, explaining why Gorgo allowed her husband to kill her father is psychologically a great deal more difficult than explaining how a man as consistently instable as Kleomenes came to commit suicide!

Last but not least, what action or statement by the historical Leonidas and/or Gorgo justifies imputing to them the level of moral perversion inherit in fratricide and patricide?  What did Leonidas or Gorgo ever do or say to give historians the right to dismiss them as brutal, self-serving criminals? The arrogance is staggering.

It is sad that modern commentators feel compelled to propagate errant nonsense about a historical figure. To be sure, we know too little about the real Leonidas to know what sort of man he was, but that hardly justifies untenable accusations of sadistic fratricide just because we are uncomfortable with the disturbing but completely plausible explanation provided by Herodotus. 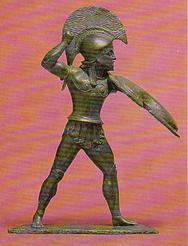