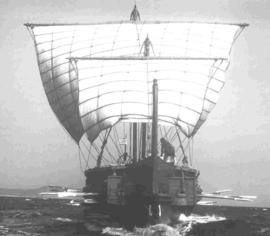 Although the Peloponnesian War is often seen as a conflict between a great sea-power (Athens) and a great land-power (Sparta), and in many history books disparaging remarks about Sparta’s “inability” to grasp the importance of sea-power can be found, Sparta ultimately defeated Athens at sea. Clearly, Sparta’s pride was her army, not her navy, and clearly the Athenians were the “lords of the sea” throughout the Classical period, but I think it worth noting that the clichés about Sparta’s lack of maritime power are overdrawn.

Sparta, unlike Athens, was not dependent on the sea for its very existence. Because it was self-sustaining in food and other necessities from ore to wood, Sparta did not need to trade.  Because Sparta was not dependent on trade, it did not need to control the trade routes. It did need to control its bread-basket Messenia, but that could be done with its army.  Thus, far from being negligent or backward (as some commentators suggest), the fact that Sparta could deploy a fleet at all is rather surprising.

In fact, based on Herodotus, it is arguable that Sparta had a credible fleet before Athens did.  Sparta’s first attempt to depose Hippias entailed, we are told, sending an army by sea (5:63) It hardly seems likely that Sparta would have sent their own modest fleet, if they had been facing a major sea-power at the time. True enough, the force dispatched was defeated on land by Thessalian cavalry, but it managed to successfully land troops in Attica, something that seems astonishing if the Athenians had truly had command of the sea at the time.

When Aristagoras convinced the Athenians to aid his rebellion against Persia, we are told the Athenians sent 20 triremes. That is respectable, but not overwhelming considering islands like Chias and Naxos could deploy fleets 100 strong. Obviously, Athens might have consciously chosen not to send too many ships, yet it seems odd they would risk the wrath of Persia with only a token force. Twenty triremes probably represented a sizable portion of their available fleet.

More to the point, Themistocles is credited with having convinced the Athenians to build a navy. He would hardly have earned the reputation as “father” of the Athenian navy if Athens already had a substantial fleet.  If the Athenian navy was indeed built up from a modest, auxiliary component of Athens’ military forces to her pride and primary arm in the ten years between 490 and 480 BC, then it is less surprising than usually assumed that a Spartan, Eurybiades, was elected to command of the combined Greek fleets opposing Persia in 480.

At the time of Eurybiades’ appointment, Athens new fleet and most of her crews were completely untested. Sparta’s fleet may have been smaller and not notably successful, but apparently the allies felt it was more experienced than Athens.’  In fact, it is less odd that Sparta was given precedence over Athens than that Sparta was given precedence over Corinth.  Corinth had a substantially larger fighting fleet and is credited by naval historians with having evolved the trireme – not Athens.

Once Athens had won the battle of Salamis, however, Athens’ domination of the seas began.  The navy was an instrument well suited to Athens radical democracy because it gave poorer citizens a means of contributing directly to Athens military power. Radical democracy in turn gave Athens the manpower to man her fleet. Middle class Athenians could remain hoplites and the sons of the wealthy could form the cavalry, while the great magnates financed the construction and commanded the fleet.  But it was Athens' citizen crews that made her fleet so good. No trireme manned by slaves or mercenaries could be depended upon to row so fast or fight so hard.

And Sparta’s fleet? We know that Spartiates were appointed to command the fleet as navarchos. Beyond that, to my knowledge the names of no Spartans who served at sea have been recorded.  On the contrary, Spartiates were required to serve in the army and did not man the fleet.  This means that the Spartan fleet must have been manned by either perioikoi or helots or both.

Helot crews would, of course, have been similar to slave crews – highly problematic as disloyalty or even mere disinterest could cost a battle. Does this explain the lackluster performance of the Spartan navy throughout most of the Peloponnesian wars?

Yet, helots would hardly have been capable of paying for the ships nor is it likely they would have been capable or entrusted with command aboard them. This suggests perioikoi most likely financed and commanded Sparta’s fleet.  This is yet another area in which the role of the perioikoi has been seriously overlooked. The fascination of ancient and modern observers with the unique live-style of the Spartiates themselves, and the alleged oppression of helots has resulted in serious academic neglect of an essential component of Lacedaemon’s success: the perioikoi.