The Significance of Marathon to Sparta 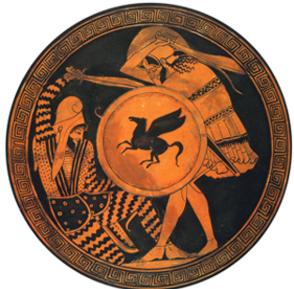 Marathon was an Athenian-Plataean victory.  Although Athens fielded her maximum force and the Plataeans sent every available man, the Persians still significantly outnumbered their combined strength. Yet when Miltiades finally led the assault, the victory went to the Athenians and Plataeans.  According to Herodotus, 6,400 Persian soldiers lost their lives on the plain of Marathon, at the price of just 192 Athenians and an unnamed, but certainly smaller, number of Plataeans. The Spartans were nowhere to be seen.

And yet, Marathon is a significant chapter in Spartan history.  First, the Athenian request is an indication that they believed halting Persian incursions in Greece was sufficiently important to Sparta to override any other considerations arising from their less than harmonious past relations. Second, Sparta agreed to send help -- despite the fact Persian wrath was directed exclusively at Athens and Eretria at this point in time. In short. Sparta would have been perfectly justified in telling the Athenians to face the consequences of their support for Aristagoras’ revolt alone.  Yet Sparta did nothing of the kind.

Sparta, according to Herodotus, was “moved by the appeal [for help], and willing to send help to Athens,” but was unable to respond immediately because they “did not wish to break their law. It was the ninth day of the month, and they said they could not take the field until the moon was full.” (Herodotus, 6:107).  Most historians interpret this to mean that Sparta was at the time celebrating the Carneia, a ten-day festival, and could not march until it was over.

That the promise was not empty is evidenced by the fact that, again according to Herodotus, after the full moon “two thousand Spartans set off for Athens.”  They covered roughly 120 miles of in part very rugged terrain to reach Athens on the third day after leaving Sparta – a notable achievement for an army on foot. They arrived in Athens allegedly on the day following the Battle of Marathon and continued on to Marathon to see the bodies of the slain.

The fact that Sparta delayed responding to the Athenian call for help has occupied historians for generations.  Given the urgency of the request and the evidently genuine desire to help, modern readers find it hard to believe the phase of the moon or a festival would have been allowed to get in the way.  Speculation about a possible helot revolt has been particularly popular. Yet I find it hard to believe a revolt could be of such a predictable nature that the Spartans could know in advance it would be over by the full-moon -- and then in fact be so completely subdued that 2,000 men – the entire active army by some accounts - could march out exactly on schedule. Hints of a revolt prior to the major insurrection of 460 may be credible, but are insufficiently precise to prove a revolt took place at exactly this point in history, in my opinion.

Equally significant but, to my knowledge, less frequently noted, is that Herodotus does not identify the Spartan commander of the 2,000 Spartans that arrived in Athens too late.  Up to this point, Sparta’s armies abroad were commanded invariably by her kings jointly or, after the debacle of Cleomenes and Demaratus quarreling openly while campaigning against Athens at the end of the previous century, by one of the kings.  It seems very odd, that suddenly, for such an important confrontation, no king is mentioned.

The absence of a king is particularly odd given the large numbers involved.  Herodotus speaks of 2000 “Spartans.”  While this need not necessarily mean Spartiates and could, at a stretch, include perioikoi, it certainly excludes Allies. Furthermore, based on the assumption that the force of 5,000 Spartiates sent to Plataea represented the maximum strength of a citizen force including 15-20 age-cohorts of reservists, 2,000 men probably represents the size of Sparta’s standing army, the citizens aged 21-30, at this time. Such a force represented the very flower of Spartan manhood and would hardly be entrusted to anyone less than a king.

But in the summer of 490, Sparta was in the midst of a dynastic crisis. The Eurypontid Demaratus had been denounced as a usurper and dethroned by a judgment of Delphi only a couple years earlier. After being humiliated by his successor Leotychidas, Demaratus fled Sparta, only for it to then come to light that Delphi’s judgment had been purchased by King Cleomenes. This cast grave doubts on the legitimacy of Leotychidas in the eyes of most Spartans, yet it appears to have been impossible to recall Demaratus.  Meanwhile, Cleomenes himself had gone mad and was in self-imposed exile.  Thus in the summer of 490, the Spartans literally had no king to whom they could entrust their army.

This situation might not have been revealed to the outside world, if the Persians had not chosen to launch their invasion of Attica at precisely this time.  Under the circumstances, the Spartan government recognized the need to confront the Persians, but, without a king to take command, Sparta was in no position to respond at once. The Spartans first had to agree among themselves how to deal with this unprecedented situation by appointing a non-royal commander. The delay in responding can, therefore, best be explained by the time needed to find a consensus candidate, which undoubtedly entailed debating the issue in the Gerousia, drafting a bill for the ephors to present to the Assembly, and calling an extraordinary Assembly. It was possible to calculate how many days that would take, and easier to blame religion than confess to the Athenians that the Spartans had a dynastic/leadership crisis. After all was said and done, the Spartan army marched out under someone other than one of the kings.

Since Herodotus is silent on who led the 2,000 men to Marathon, we will never know for sure. However, one candidate stands out as the most likely commander: Leonidas.  Leonidas was an Agiad. He was heir to the throne. He was a mature man, probably with considerable military experience by this point in time. At a minimum, he would have fought at Sepeia against Argos just four years earlier. It is hard to imagine that anyone else in Sparta at the time could claim equal right to lead the Spartan army in the absence of her ruling kings.

If Leonidas indeed led the Spartan army that arrived in Athens one day too late for the Battle of Marathon, it would have given him the opportunity for him to meet Athenian leaders – and win their trust. This may in turn have been a contributing factor to Leonidas’ election as commander of the joint Greek forces ten years later.  Perhaps equally significant, arriving one day too late for Marathon may have left a psychological scar that made Leonidas determined not to come too late to Thermopylae. In 480, Leonidas refused to await the end of the Carneia and took his advance guard out of Sparta before the end of the festival.  I think Leonidas was determined not to be late again.