Most historians confine their commentary on Leonidas to his appearance and departure from the scene of history.  His reign was, after all, quite short (ten years) and there were no known changes to Spartan territory or law, no works of art or monuments, not even any natural disasters that can be dated specifically to the reign of Leonidas.  It is therefore presumptuous of me to label Leonidas a “reformer king.” I know that.

Now that I have your attention….

Looking at Spartan history from the Messenian War to Sparta’s dismal and ignominious end under Rome, the reign of Leonidas represents in many ways a turning point.  In crude terms, the archaic age extended from the mid-eight century to end of the 6th century  BC. The classical age followed. Thus Leonidas’ reign fell at the transition.

In Sparta, it is exactly that transition that represents a particularly sharp and significant break in Sparta’s development.  The history of Sparta as a distinct city-state coincides with the dawn of the archaic period with the Messenian War that sparked the unrest that led to the introduction of Sparta’s unique laws. Archaic Sparta saw not only the establishment of this new, revolutionary form of government (arguably the first democracy in history), but also a significant flourishing of the arts and trade. Sparta’s most significant monuments (e.g. the Menelaion, the Amyklaion) were constructed in the archaic period. Sparta’s most famous poets – Tyrtaios, Alkman – lived and worked in the archaic age. Sparta produced sculptors – some of whom were explicitly described as Spartiate – of such international  renown that they produced works for Olympia, while Sparta developed  export-quality pottery in the 6th century.  Sparta’s archaic bronze works were even more outstanding and competitive, reaching a peak in quality and creativity in the early 6th century.  Not least important, Sparta’s most admired statesmen in the ancient world, Lycurgus and Chilon, both lived in the archaic period. While many doubt that Lycurgus was a real person and prefer to see him as a mere legend, Chilon was very certainly real, one of the ancient world’s “wise men.”

Sparta in the classical period in contrast is characterized by artistic stagnation and such a dramatic end to Sparta’s competitiveness in trade and manufacturing that those who study only classical and Hellenistic Sparta are completely unaware of Sparta’s impressive earlier accomplishments. Indeed, based on descriptions of the Spartan state and constitution written at the end of the fifth century and later, Sparta appears to have become a city-state that disdained luxury and by inference art itself.  Certainly Sparta’s exports of finished products declined, and a sharp drop in number of artifacts from this period found at the sites of Spartan temples may indicate that domestic production was also severely restricted. (Alternatively, younger layers of deposits were lost due to flooding, earthquakes etc.)

Assuming the existing archeological record and the writen depictions of Spartan society more-or-less accurately describe classical and later Spartan society, then Sparta underwent a radical, indeed revolutionary, change in the mid-5th century.  The question is why?

There are a number of possible answers: A) the Persian Wars, B) the Great Earthquake of 465 and subsequent population decline, C) the Helot Revolt; D) the bitter war with Athens, and E) All of the Above.

So  what does this have to do with Leonidas?  My thesis is that Leonidas was the last of the archaic kings not just in terms of timing but in terms of policy. Sparta obtained its reputation for opposing tyrants and built up the Peloponnesian League in the second half of the 6th century during the reigns of Leonidas’ two predecessors, his father and half-brother.  These policies reflect on the one hand an interest in world affairs, and on the other a willingness to negotiate and compromise rather than rely on brute force.

The evidence for Leonidas’ cosmopolitanism is first and foremost his election to lead the coalition of Greek states that opposed the Persian invasion of 480. This fact has far too often been interpreted simply as a tribute to Sparta’s position as the leading Greek power of the age.  This ignores the fact that just two years after Leonidas’ death, the same coalition of forces preferred Athenian leadership to submitting to command by Leonidas’ successor Pausanias ― and Pausanias had just led the coalition to a spectacular victory at Plataea! Sparta was not less powerful in 478 than she had been in 480, and her reputation in arms was greater. If simply being Spartan was all that mattered to the allies, the coalition would have asked Sparta to send King Leotychias or another Spartan general to replace Pausanias, but it did not. Just as Pausasias was not elected in 478, Leonidas was elected in 480, not because he was Spartan but because of who he was.  In 481, Leonidas personally enjoyed the trust of the coalition partners.

Leonidas probably gained that trust through personal contact, and that suggests a degree of travel within the Greek world. He probably attended the pan-Hellenic games regularly, for example. (Other Spartan kings of his age were competitors.) He may also have met leaders from other cities in Sparta itself, if they came to see the Gymopaedia or Hyacinthia, for example.  However, Gorgo allegedly made her famous statement about why Spartan women “rule” their men to a woman from Attica. Since Athenian women weren’t supposed to set foot out of their home let alone outside their cities, it is far more likely that the exchange, if it occurred at all, took place in Attica than Lacedaemon. The most logical explanation would be that Gorgo travelled with Leonidas to Athens at some point in his reign. As the Persian threat grew, it would have been very logical to find Leonidas garnering support for a united stand against the invaders by travelling to all major Greek cities, first and foremost Athens, but also Thebes and Corinth.

During Leonidas’ lifetime, Sparta not only took an active interest in world affairs and exported significant works of art (sculpture, bronze, pottery) overseas, it also commanded respectable naval resources. In the reign of Leonidas’ father, Sparta undertook an expedition against Samos and his half-brother launched a seaborne attack against Attica. The significance of a navy is that it required loyal oarsmen. Rowing a warship is notoriously back-breaking, tedious, stinking work. It was so unpleasant that it was a form of punishment in later centuries and criminals would be condemned to “the galleys.” Slaves, chained to the oar-banks, is an image we carry around with us from films like “Ben Hur.” In fact, however, in the ancient world, particularly in ancient Greece, the crews of warships were predominantly citizens.  This was because no city could afford to entrust the maneuverability and speed of their fighting ships to anyone who did not have a stake in the outcome of an engagement.

The most probable source of competent seamen was the perioikoi residents of Lacedaemon. Perioikoi towns, unlike land-locked Sparta, were often located on the coast (Epidauros Limera, Boiai, Kardamyle, Asine, Pylos, and, of course, Gytheon, to name only a few.) On the other hand, the perioikoi element at Plataea equaled Sparta’s, suggesting that the perioikoi elite did not greatly outnumber the Spartiates themselves. Another source of seamen would have been helots, but if helots were as oppressed and hostile to Sparta as most historians claim, then it would have been suicidal to trust the oars of naval ships to helot oarsmen.

On the other hand, conditions for helots were not as consistently severe as generally presumed, then there might have been at least some loyal helots.  Possibly special incentives in the form of emancipation or increased status was offered to helots who served in Sparta’s fledgling navy, or, alternatively, conditions for helots were generally improving throughout the later part of the 6th century when Sparta was evidently enjoying a period of prosperity and comparative peace.  The very fact that the Spartans could take 35,000 helot auxiliaries with them to Plataea suggests widespread support among the helot population. (Suggestions that the Spartans took 35,000 rebellious helots with them when marching out to face the undefeated Persian army are ludicrous.) In short, in 480 BC Sparta had a fleet of at least 16 triremes requiring almost 3,000 oarsmen and 35,000 light troops, all of whom were deemed loyal to the Spartan state. Sparta were putting her future in the hands of these helots.

But roughly one decade later the only recorded helot revolt against Sparta erupted.  This is highly significant because we know that revolutions occur neither when people are content nor when they are most oppressed or exploited.  Uprisings are most likely to occur when a long period of rising living standards and political expectations is abruptly ended by economic or political crisis. My hypothesis is that during Cleomenes’ reign helots had enjoyed a slow but steady increase in living standards, something that accelerated under Leonidas and was combined with rising political expectations. In the post-Leonidas era, however, these hopes and expectations were sharply shattered, leading to the explosive situation that culminated in the revolt.

Leonidas was undoubtedly the last of the archaic kings. Sparta’s archaic age saw the foundation and development of Sparta’s political system, flanked by a highly sophisticated foreign policy and the evolution of a powerful alliance system.   Archaic Sparta witnessed the blossoming of artistic and musical accomplishment, the growth of trade in finished products with a wider world, and the growth of naval capability. The archaic was Sparta’s golden age. Would it have continued if Leonidas and his closest companions had not died at Thermopylae? Probably not indefinitely, but possibly the helot revolt that led to intense paranoia in the later 5th century could have been avoided. Likewise, if Leonidas had still lived, neither Pausanias nor Leotychidas would have been given a chance to turn Sparta’s allies into enemies. 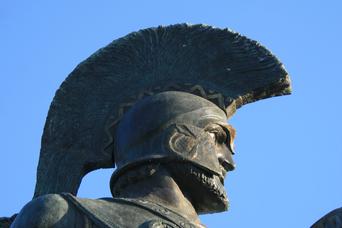