Sculpture and Crafts in Bronze, Ivory, and Terra Cotta

There is now significant archaeological as well as historical evidence that Sparta enjoyed an artistic Golden Age from roughly 650 to 550 BC.  In this period, its artistic achievements were renowned throughout the known world.  At this time, Spartan sculptors were active not only at home but also in cultural centers such as Olympia and Delphi; at least nine sculptors are known by name.

Spartan bronze products were of such high quality that they were viewed as valuable diplomatic gifts and found their way to the far corners of the earth.  Laconian pottery was, for a period of roughly 100 years, sufficiently valued to be a significant export commodity. Beautiful examples of Laconian pottery still exist, providing sufficient evidence of the very high quality of both the pottery and the painting – even if classical Corinthian and Athenian vases and painting demonstrate a yet higher quality a century later.  Laconian ivory work was another export product, reflecting the high quality of the craftsmen.

Without doubt, Sparta was most renowned in its own time for its poetry, music, and dance.  We know of four Spartan poets and lyricists whose works were admired throughout the ancient world, although only fragments of their work have survived the centuries.  We know that people traveled great distances to witness the choral and dance contests of the Spartans at their various festivals, particularly the Gymnopaedia and the Hyakinthia.  It is also recorded that the Spartans advanced into battle singing.  Yet, as with all ancient Greek music and dance, nothing remains for the modern observer to grasp.  It is left to our imagination. 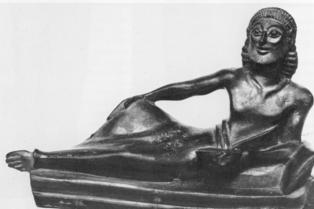