Liberty, equality and fraternity among the philosopher warriors 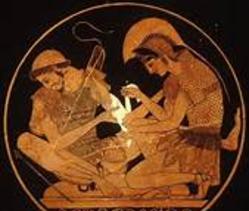 There is no clear explanation for the roots of Sparta's unique emphasis on silence, simplicity, and precision, although it probably had Doric roots.  Doric architecture, for example, is the simplest of the three Greek orders.  Nevertheless, there is little doubt that by the 5th century BC, Sparta had cultivated a tradition that put conscious emphasis on silence and simplicity over eloquence and decoration.

What is often overlooked by modern commentators is that the silence cultivated in Sparta was not the silence of dumb animals, but of thinking men, who recognize that it is wise to think before speaking and to speak only when they have something worth saying.  This is the essence of Spartan rhetoric and the reason it was so highly prized by philosophers such as Socrates and Plato.  If one is looking for a more modern parallel, the example of the Quakers might be appropriate.

Simplicity in dress, architecture, and art was a natural expression of this fundamental philosophy that "less is more" and precision preferable to ambiguity and ambivalence.  To say that Spartan dress and architecture were simpler than that of contemporary cities is not to say it was primitive, only that it was more precise and made more use of natural elements.   The focus on the functional and the essential need not be associated with a disdain for beauty.  Most modern observers admire the Parthenon in Athens today for the perfection of its proportions and would be irritated and distracted to see it painted brightly, as it was in ancient times.  Likewise, modern architecture and design has rediscovered the Spartan love of the pure beauty of form and material.

The Spartan land reform (described in the essay on the Spartan government and constitution) made all Spartan citizens equals, or Peers; and they not only described themselves as such, but reinforced the notion of equality by discouraging anything that would set one citizen apart or above another.  Sparta was the first city-state to introduce a uniform for its army: scarlet chitons and cloaks, and indeed uniform shields, all bearing the lambda, or L, for Lacedaemon. Spartans also wore their hair in the same fashion: the boys of the agoge going about shaved, the young men with short hair, and the men over the age of thirty growing out their hair and often wearing it braided.  Not until the second half of the 5th century do artistic depictions of Spartans indicate that the neat appearance of the archaic period had given way to an unkempt, almost barbaric fashion.

All adult male citizens were, furthermore, bound together through three distinct and separate institutions.  First, the sons of citizens were required to attend the public school system, the agoge, from the age of seven through the age of twenty.  Second, all male citizens between and including the ages of 21 and 60 had to serve in the army.  A distinction was made between the first 10 age cohorts, who were required to live in barracks and were in effect on active service, and the elder age cohorts, who lived at home but could be called up at any time, similar to reserve status today. [symposium]  Third, all male citizens were required to join a syssitia, or dining club, and to eat at this club every night (unless excused), providing set amounts of food from their estates to support the common meals.  Although every citizen had to belong to a syssitia (also known as phiditia), each citizen chose which club he wanted to join and the existing members voted to admit the new applicant – or not.  One veto from an existing member was sufficient to prevent a new member from joining.  Unexcused absence from the mess incurred a fine – something not even the kings were exempt from.  However, Spartiates (Spartan citizens) could be excused for a variety of reasons, from war to hunting and the Olympic Games.

The bonds of school, military, and club were designed to keep the society closely knit and not divided along family and clan lines.  They did not, however, replace family ties, as some modern observers assume.

Attending the agoge, the public school, from the age of 7 did not sever family ties any more than sending children to school today does.  There is no evidence that the small children slept in barracks – they may well have slept at home – but even if they slept in dormitories on school nights, they would still have gone home for holidays.  Sparta had many holidays, and some were so important that observance of them was more important than going to war – even in an emergency.  School children would have spent probably as much as one-third of any year away from school, much as they do today.  [Reclining Man] Furthermore, Spartan girls went to the same schools and gymnasiums as their brothers – and future husbands.  Spartan youth therefore had far more contact with the opposite sex than did their contemporaries in other Greek cities, which in turn meant that the bonds between the sexes were also stronger than elsewhere. Shared memories of a common schooling would have strengthened Spartan marriages, and parents would have been careful to pass on their experiences of the agoge to their offspring in order to help them survive this critical prerequisite of citizenship.

The military duties of Spartan men were likewise less onerous than modern military service in distant theaters of war, which can keep men away from their families for years on end.  Until the Peloponnesian War, ancient warfare consisted of marching out, meeting the enemy on a flat, open plain, fighting a single battle, and then returning home – victorious or defeated – within a few weeks.  Most campaigns lasted no more than a month or two, and they usually took place after the harvest was in.  Sparta was not continuously at war until the second half of the 5th century. Before that, Spartan men would not have been away at war for more than a few months at a time, and by no means every year. Some men might have been absent at war no more than a month or two in their entire lives.

Finally, the fact that men ate their evening meal away from their families need not have been more disruptive of good marital or family life than the fact that most modern couples eat their midday meal apart.  On the contrary, the rhythm of Spartan life might actually have fostered good family relations, because men and women probably would have shared the middle of the day together, when other activities were not possible because of the heat.

What set Sparta apart from other Greek city-states was not language, religion, or even laws – all of which were shared in broad terms with the rest of the ancient Hellenic world – but a unique ethos that permeated all aspects of life.