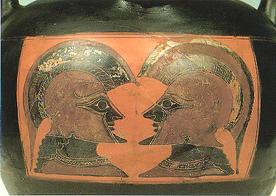 Ancient historians had no convenient system for marking the dates of events – which makes it even more difficult for modern historians to try to apply dates to the events described.  We therefore have no way of dating the Spartan revolution with certainty.  Ancient sources agree, however, that following a period of unrest – possibly even a rebellion of some kind – new, revolutionary laws were introduced.  These laws were submitted to the oracle at Delphi, which advised the Spartans that they would live better under these laws than any others.  These laws gave an Assembly of all citizens the final say in all matters, making Sparta the first – but by no means the most radical – democracy.

As is typical of early, innovative institutions, later modifications introduced in other cities made the Spartan democracy appear conservative as time went by.  Sparta, for example, never entirely freed itself of its kings.  Two jointly ruling hereditary monarchs from different families held restricted and mostly ceremonial functions throughout Sparta's history as an independent state – very much as the English monarchy functions today.

Another notoriously conservative aspect of the Spartan constitution was the Council of Elders, or Gerousia.  Although this body was elected, as were similar institutions in other cities, the Elders had to be over 60 years of age and were elected for life.  In consequence, they were not subject to the most effective of democratic censures: the need to be re-elected.

Nevertheless, Sparta's constitution clearly gave precedence to the Assembly.  The Assembly, which is believed to have met on a monthly basis, was composed of all adult male citizens.  Although it could vote only on the bills presented by the Council, the common misconception that the Assembly could only vote yes or no is belied by accounts of lively (not to say rowdy) debates.  (Note, also, that modern legislatures also vote on bills presented and do not evolve legislation spontaneously during debate.)  Certainly, the Spartan Assembly was powerful enough to exile kings.  Nevertheless, the Spartan Assembly never attained the absolute tyranny of the Athenian Assembly – a point praised widely by ancient writers, who saw in Sparta's more balanced (bicameral) democracy a means of controlling the fickleness of the mob.  Most people today, used to representational democracy, would feel more comfortable in Sparta's democracy than in that of Athens, where many officials were chosen by lottery and the votes of illiterate and impoverished citizens were easily manipulated and purchased by demagogues.

Sparta also had five elected ephors.  The ephors were executives responsible for carrying out the day-to-day business of running the city, including the receiving and sending of ambassadors.  Initially they appear to have been little more than clerks, but at the time of Chilon (mid-6th century) they acquired more power and prestige.  Acting together during any one period, they could have a significant impact on Spartan policy.  For example, they are credited with forcing King Anaxandridas into taking a second wife in the second half of the 6th century.  However, their power was not as enduring as that of the monarchs or the Gerousia, because the ephors were elected for only one year and could not be re-elected.

The most radical feature of Sparta's constitution, however, was the introduction of land reform.  Although this event, too, is lost in the mists of undated ancient history, all ancient historians agree that at some time (probably in the late 8th or early 7th century BC, by our reckoning) Spartan society underwent a severe crisis.  A rebellion or civil war so threatened the continued existence of the city-state that the citizens were prepared to accept radical new laws – effectively, a new constitution.  This constitution, reputedly developed by Lycurgus, not only gave power to an Assembly of all citizens, but included a redistribution of the land.  The land was divided into equal plots of sufficient size to support a man and his family, and each citizen was given a plot, or estate – a kleros.  Henceforth the Spartans called themselves equals, or Peers – because they were equal not only in rights but also in wealth.

There is no question that with time this equality of wealth was eroded.  By the second half of the 5th century BC, wealth had become concentrated in the hands of fewer and fewer families.  Spartan citizens were no longer equally wealthy.  This has led some modern historians to question that the land reform ever took place or to try to explain how inequalities came into the system.  One answer is that only some of the land, most probably that in the immediate vicinity of Sparta (that is, in the Eurotas valley), was divided into equal portions, but that other estates – notably land conquered later in Messenia – were not divided equally and were not controlled by the state.  Another factor influencing the distribution of land over time would have been inheritance laws, particularly the right of women to inherit.  An excellent short discussion of Sparta's land reform is provided in Paul Cartledge's Sparta and Laconia: A Regional History 1300 to 362 BC (Routledge, London, 1979), and a more comprehensive treatment of the subject can be found in Stephen Hodkinson, Property and Wealth in Classical Sparta (Duckworth, London, 2000).

Yet even if Spartans were not in fact equally wealthy, the myth of equality remained powerful, and laws prohibited the hoarding of wealth, particularly the ownership of gold and silver coins (possibly all gold and silver).  The ostentatious display of wealth was frowned upon socially.  This set Sparta apart from the other Greek city-states, where the landed aristocracy, wealthy merchants, and manufacturers engaged in extravagant displays of wealth and competed for the honor of donating the most generous gifts to their respective cities.  Spartan dress, taste, and style were notoriously modest, even austere, but Spartans were not crude, dirty, or unkempt – as contemporary art amply demonstrates.  In fact, modern eyes might well have preferred the Spartan style of whitewashed buildings to the gaudy painting of temples and statues common in the rest of the ancient world.  Certainly, while the citizens of other cities could be reduced to beggary, all Spartans were guaranteed a minimum standard of living – something most modern observers would applaud rather than condemn.