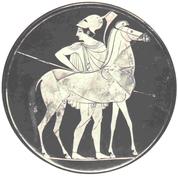 Spartan public education was the subject of extensive – and controversial – discussion even in the ancient world. No other contemporary state provided for, and in fact required, its citizens to attend public school. Unfortunately, because we must rely on descriptions of the system provided by outsiders, we have a kind of mirror image of the Spartan agoge.  Observers reported whatever struck them as unique or different from education in their own cities, rather than reporting systematically about Sparta's system of education.  Equally distorting for the modern historian interested in archaic Sparta is the fact that all our existing ancient sources except Xenophon describe the Spartan educational system as it was reinstituted in the Hellenistic period, after what may have been nearly a century in abeyance.  It is often very difficult to distinguish traditional from innovative features of the described schooling.  (The best account of the agoge and its different stages of development is provided by Nigel Kennell in The Gymnasium of Virtue (University of North Carolina Press, Chapel Hill, 1995).

Nevertheless, a number of characteristics of this education can be surmised.

First, collective education was considered so important that not only was the agoge a compulsory prerequisite for citizenship, but all adult males bore an equal responsibility for rearing good citizens.  This was manifest in the laws that required boys in school to address all older men as "father" and gave any citizen the right to reprimand – but not punish – a boy or youth under age.  As best as historians can piece together from ambiguous evidence, all citizens were directly involved in the education of the next generation in another respect as well: at the age of 20, before being awarded citizenship at 21 and serving in the army, young Spartans acted as instructors in the agoge for their younger classmates.

Despite the emphasis on public education, it is absurd to think that parents did not take a very personal and intense interest in the education of their own offspring.  Numerous quotes demonstrate the pride and sense of personal accomplishment that Spartan mothers felt with regard to their sons.  Human nature, which has changed very little in 3000 years, suggests that fathers would not have been less proud.  (On this point, the article by Jean Ducat, "Perspectives on Spartan Education in the Classical Period," in Sparta: New Perspectives (edited by Stephen Hodkinson and Anton Powell, Gerald Duckworth and Co. Ltd, London, 1999), is particularly cogent.)

Second, all sources agree that the principal goal of public education was to raise good future citizens.  One aspect of this goal is obvious: future citizens were by definition professional soldiers, and so the educational system very clearly sought to create physically hardened men, capable of enduring hardship, pain, and deprivation.  This was exceptional in Greece, and hence attracted particular attention.  Many anecdotes are told about the hardships the boys endured, and that they were allowed to steal.  Despite a common misconception found even in ancient commentary, careful research indicates that the boys in the agoge were not encouraged to steal throughout their training – only during a specified segment. (Again, see Kennell on this point.)  Most likely, this was a form of survival training intended to teach the youths how to survive on their own so that they would be able, for example, to operate behind enemy lines.  Throughout their public education, they were also apparently subjected to harsh discipline, which may have included flogging – a punishment reserved almost exclusively for slaves in other Greek cities.   But it was not until the Roman period that whipping contests were introduced, in which boys were brutally flogged just to see how long they could endure.

Less obvious, and often overlooked by modern observers, is the fact that being a good soldier required much more than just an ability to endure hardship and obey orders.   Good soldiers have to be able to track, hunt, and fish, to navigate by the stars, to provide first aid, to recognize poisonous and medicinal plants, to build fortifications and to undermine them, and much more.  Furthermore, good soldiers can think and act independently; they can recognize opportunities and seize the initiative.  It is reasonable to assume, therefore, that the agoge taught fundamental first aid, botany, astronomy, and so on.  Certainly it raised youth who were capable of independent thought and action, as the evidence of Sparta's successful independent commanders (such as Gylippus, Mindarus, and Lysander) amply proves.

Furthermore, the goal of producing good future citizens was not fulfilled by producing good soldiers alone.   Future citizens had to be able to deliberate wisely in the Assembly, to serve as magistrates and judges, and to conduct negotiations with foreign powers.  Thus, despite the harsh discipline, Sparta did not seek to break her youth or make them subservient.  Instead, they were taught not only their laws but also the functioning of democracy from the very start of their schooling – not in theory, but in practice.  On starting school at the age of 7, the boys were organized into units, teams, or herds – and elected their own leaders.  Some sources suggest that they also elected their instructors from among the eligible 20 year-olds.

Even more noteworthy is the fact that Socrates himself considered the Spartans the greatest philosophers in mainland Greece.  It has been argued that Sparta not only welcomed and entertained philosophers such as Pythagoras for years on end, but actually provided the foundation for Milesian, Pythagorean, Socratic, Platonic, and Aristotelian philosophy.  Certainly Socrates, Xenophon, and Plato were admirers of Sparta; it hardly seems reasonable to hypothesize that these leading Athenian intellectuals admired a city-state that – as many modern writers portray it – was anti-intellectual and inhabited by illiterate brutes.  (An excellent article on this topic is provided by W. Lindsay Wheeler, in Sparta: Journal of Ancient Spartan and Greek History, Vol. 3, Issue 2, 2007.)

Furthermore, although there may have been more emphasis on physical fitness in a Spartan education than elsewhere, numerous sources testify to the fact that Sparta also placed great emphasis on training the intellect.   The fact that no contemporary source mentions that the boys learned to read and write has been taken mistakenly to mean that they did not.  This is absurd.  There is abundant evidence that the Spartans were every bit as literate as other Greeks.  Anything less would have put Sparta at a disadvantage in foreign affairs, and would have made it inconceivable that Spartans were repeatedly requested to assume positions of leadership.  Furthermore, the percentage of Spartans who were literate clearly exceeded that of any other city-state because – in contrast to the other cities – Spartan women were literate.  The fact that learning to read and write is not mentioned in the descriptions of the Spartan agoge is a function of the fact that all Greeks learned these skills while in school, and so this was not deemed worthy of comment.

Worthy of comment, however, was the excellence of Spartan education in music, poetry, and dance.  The boys and youths of the agoge were famed for their proficiency at all three skills.  Such skills require practice and are further evidence that modern depictions of the Spartan youth living like wild beasts in the wilderness is pure fantasy.

Another area in which Spartans excelled was in brevity and clarity of expression.  Rhetoric in ancient Greece was highly valued.  Men paid large sums to improve their speaking skills, and in democratic Athens power rested with those men who could sway the Assembly with their rhetoric.  This skill with words largely accounts for Pericles' and Alcibiades' power in their time.  If Athenians collected Spartan sayings and laconic forms of expression were admired, this is clear testimony of the quality of Spartan education in this regard.

Lastly, the manners of Spartan youth were admired in the ancient world, and comparisons were often drawn to the rude, impudent youth of other cities.  One anecdote describes an old man looking for a seat at the Olympic Games.  As he stumbled about from one section to the other, the spectators laughed at him.  But when he came to the Spartan section, all the Spartans stood to offer him their places – and there was universal applause.  The moral drawn by the commentator was: You see, all Greeks know how we ought to behave, but only the Spartans act on it.