Sparta and the Gods: Spartan Piety 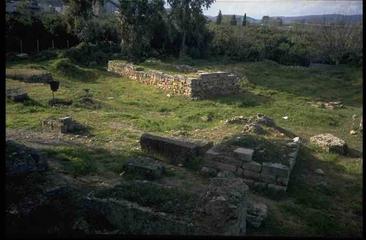 In ancient times, Sparta was renowned for the piety of its citizens.  This included delaying deployments of the army to honor religious festivals, most famously before both Marathon and Thermopylae. In addition, the Spartans consulted the Oracle at Delphi before undertaking any major action. Thus the Spartan Constitution had to be"approved" by Delphi before it was adopted by the citizens, and the deposition of King Demaratus, likewise, required a judgement from Delphi -- just to name two examples. Yet, given the diversity of ancient Greek gods, it remains difficult to grasp just what Spartan "piety" actually entailed. A look at Spartan festivals and temples, however, provides some clues.

Curiously, the famous warriors of Ancient Greece did not particularly honor the God of War, Ares. Athena, not Ares, was Sparta's patron. Furthermore, Nikolaos Kouloumpis notes in his article “The Worship and the role of Religion in the formation of the Spartan state,” (Sparta: Journal of Ancient Spartan and Greek History, Vol. 6, #1), that Sparta’s most important festivals, the Karneia and Hyacinthia, were dedicated to Apollo. Even the Gymnopaedia, arguably the most famous of Sparta’s annual festivals, was dedicated to Apollo and Artemis, Dionysus and Leto.

The choice of Athena as Sparta's patron reflects the fact that Sparta placed a greater value on intellectual than martial achievement, while there is a relationship between the reverence for Apollo and Sparta’s renown in the field of music and dance. Certainly, the festivals dedicated to Apollo provided the occasions for choral and dancing competitions, and the performances attracted tourists from throughout the ancient world, who in turn admired Spartan prowess in these disciplines.

Yet Spartan devotion to other gods did not stop there.  There was the  (more infamous than famous) festival of Artemis Orthia, which, as the name implied, was dedicated entirely to Artemis. Yet, the cult of Menelaus and Helen was only slightly less important, although we did not know how the Eleneia was celebrated. In fact, in addition to these, Kouloumpis lists cults to Asclepius (!), Achilles, Hercules, Alexandra/Cassandra, Agamemnon, Castor and Pollux/Polydeukes and Helios. (Note: Ares does not rate even an “honorable mention.”) While the heroes Achilles, Hercules, Agamemnon, Castor and Polydeukes clearly have close associations with Sparta’s legendary roots, the reason Sparta should honor Asclepius and Helios with festivals is not so readily apparent, yet undeniable.

Turning from festivals to sanctuaries, Pausanias, in his detailed guide to the “significant” sites of Sparta, records only three temples out of more than 150 temples, sanctuaries and shrines that are dedicated to Ares. Two are notably located outside of Sparta proper, one in Amyclae and the other even farther away in Geronthrai. The only temple to Ares in Sparta itself is one in which the God of War is shown in chains, according to Pausanias because “in Lakonia they think the god of war will never desert them if they keep him in chains; [just as] in Athens they believe Victory will stay with them forever because she has no wings.” (Pausanisus, Book III, 15:6). By comparison, there are ten temples/shrines to Athena, six to Zeus, and five to Aphrodite. The Divine Twins, Castor and Polydeukes, Apollo, Artemis, and Poseidon and Asklepios also each rate more temples than Ares.

While the large number of sanctuaries dedicated to Athena and Zeus hardly need an explanation given their power and prominence in the ancient Greek pantheon, it does seem odd that Aphrodite, Poseidon and Asklepios should receive comparatively more honors than the god of war in land-locked, warlike Sparta. Poseidon might be explained in that he was also called the “Earth Shaker” and, given impact earthquakes had on Lacedaemon, the Earth Shaker was clearly a god to be appeased. Notably one of Sparta’s temples to Poseidon is to the “Horse-Breeding” Posiedon, and so a reflection of Sparta’s interest and success in equestrian sports.

But why do Aphrodite and Asclepius place ahead of Ares in terms of the number of sites dedicated to them? One possible explanation would be the association of Aphrodite with Kythera, which was part of Lacedaemon for the better part of 500 years. Allegedly, the worship of Aphrodite originated on Kythera, and conceivably the cult spread from there to the mainland of Lacedaemon. However, it is notable that to date the only temple from the Classical period to have been identified on Kythera was dedicated not to Aphrodite but to Asclepius. Possibly the worship of the God of Healing also moved from Kythera to Sparta. Alternatively, the need to treat battle injuries fostered a particular reverence for Asclepius. Such an interpretation and the fact that there appear to have been more temples to Asclepius than Ares suggests the Spartan’s trusted more to their own skills to win wars, than survive the aftermath.

More important, however, is not the relationship between Ares and Asclepius as such but rather the fact that Sparta was filled with sanctuaries and temples to a great diversity of gods, demi-gods and heroes. By no means was Spartan worship narrowly focused upon the god of war, or even warrior heroes such as Achilles. Instead, the heroes Heracles, Castor and Polydeukes, whose greatest deeds were performed outside the context of war, receive more attention. This plethora of religious/cult focus in turn suggests that Spartan society was far less narrow-minded and obsessed with things military than most commentators imply. At a minimum, the religious landscape of Lacedeamon should give us pause and induce us to question whether Sparta worshiped war at all.

On the other hand, the worship of Castor and Polydeukes also tells us something about the Spartan. According to ancient Greek mythology, the Divine Twins, the Dioskouroi, were the brothers of Helen.  More precisely,  Polydeukes was Helen’s full-brother, likewise fathered by Zeus on her mother Leda, while Castor was her half-brother, the son of Leda by her (mortal) husband Tyndareus, the king of Sparta. Raised at the Spartan court as twin sons of the king, the Dioskouroi lived the ideal lives of aristocratic youth in the age of heroes. They had great adventures, sailing with Jason on the Argo, hunting boar with Herakles, rescuing their sister from the Athenian king Theseus, who had abducted her – and then robbing two sisters from a neighboring kingdom for their own wives. Nothing about these adventures suggestions anything particularly virtuous or morally exemplary. They were, it seemed, just hot-blooded young Greek heroes.

And then, in a fight over stolen cattle, Castor was killed. According to the myth, both brothers would have been killed, if Polydeukes hadn’t been immortal.  Because, however, Polydeukes is a demi-God, he lives on after his mortal end. He goes to his father’s home on Mount Olympus, while Castor goes into the cold, dark grave, a prisoner of grim Hades, destined never to see the light of day or breathe fresh air or enjoy any pleasures of the senses ever again.

According the myth, Polydeukes was so distraught by his brother’s fate that he was unable to enjoy his own immortality. Seeing his son’s misery, Zeus took pity on him and allowed the twins to switch places on an alternating basis. Every other day, Polydeukes took his brother’s place in hell, so that Castor could escape the grave.

There is something wonderfully Spartan about this tale. It includes both the love of life, which – contrary to popular opinion – was characteristic of ancient Sparta (see Loving Life in Lacedaemon and Nothing in Excess), and the spirit of self-sacrifice that we associate with Leonidas.