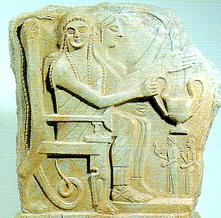 Although Helen, the ultimate femme fatale, was undoubtedly a child of Sparta, few people nowadays think of love when they think of Sparta. Certainly, Spartan art lacks the plethora of explicitly erotic art that is found elsewhere in Greece. Yet the historical record suggests that love – in contrast to lust – was indeed a feature of Spartan society. Herodotus, for example, explicitly states that King Anaxandridas refused to divorce his apparently barren wife out of affection for her, and only reluctantly agreed to take a second wife.  Likewise, Spartan sculpture has a tradition of showing man and wife side-by-side in harmony and near equality (and strongly reminiscent of Egyptian sculpture, by the way).  Last but not least, Spartan law was the least misogynous among the ancient Greek city-states, and so it was the city-state in which women were most likely to be loved rather than despised.

Before this general background we have two historical figures, uncle and niece, man and wife, Leonidas and Gorgo.  What can we glean about them from the historical record? Is there any indication of what their relationship might have been?

While we know that Leonidas was Gorgo’s uncle, we do not know when either was born and so do not know the age difference between them.  Herodotus states that Leonidas was born only “shortly” after his brother Doreius, in which case he would have been roughly 60 years old at Thermopylae.  Likewise, according to Herodotus, Gorgo was only about eight years old in 500, which would have made her 28 when Leonidas died at Thermopylae, or 32 years younger than he.  Such an age difference would have been unusual in Sparta, and there are several reasons why I believe this is unlikely. First, Leonidas’ performance at Thermopylae in the forefront of the most bitterly fought phalanx battles of history is improbable for a man of sixty.  Hoplite fighting was grueling even if it lasted only a few hours on a single day. Second, it would mean Leonidas had been nearly 50 when he married, again something that violated Spartan law and custom. Finally, it would mean that Cleomenes’ only child had not been born to him until he was over thirty, something which was also unlikely for a ruling king.

It is far more likely that Leonidas was not much more than 45 at Thermopylae, 45 being the age at which Spartan reservists were no longer called-up for front-line service (i.e. the age at which they were considered no longer fit enough for the rigors of hoplite battles.)  Likewise, it is very probable that Herodotus underestimated Gorgo’s age in his depiction of her encounter with Aristagoras, either intentionally (in order to discredit Cleomenes), or unintentionally (because he was unaware that Spartan girls did not marry until their late teens).  (In the rest of Greece, a girl was married as soon as possible after her first period, so any girl still in her father’s home was per definition a “child.”) It is far more likely, however, that Gorgo was a teenager rather than a small child in 500 BC. This would mean that about 15 years separated Leonidas from Gorgo.

While less unusual than a 32 year age difference, the age gap is still enough to mean that Leonidas would already have been in school by the time Gorgo was born, and make it unlikely that they spent much time together as children. The relationship would have been further complicated by the fact that Cleomenes was the son of Anaxandridas’ second wife, while Leonidas the son of his first. Leonidas’ full brother Doreius refused to serve Cleomenes and twice led expeditions abroad to set up colonies. While Leonidas appears to have been singularly loyal to Cleomenes, there is no indication that he was particularly favored or close to Cleomenes – except the marriage itself.

The fact that Leonidas was, after the departure of Doreius, Cleomenes’ heir apparent provides the most logical explanation of Leonidas’ marriage to Gorgo.  Gorgo clearly presented the Spartan state with a problem since the most important duty of Sparta’s kings was to lead her hoplite army – something no woman, not even a Spartan woman, could do.  This does not, however, mean that the throne could not be transferred – like other property – from an heiress to her husband or son.  Sparta’s inheritance laws were notoriously woman-friendly, allowing for heiresses to inherit.  Therefore, the Spartans must have worried that any man who married Gorgo would claim the Agiad throne, if not for himself then for his sons by Gorgo. By marrying Gorgo to his half-brother and closest male relative, Cleomenes avoided any of these potential problems.

In short, the marriage of Gorgo and Leonidas was almost certainly dynastic; the marriage need not have involved any kind of inclination or affection on either side.  But the case is not quite that simple.  First, as the closest male relative of Cleomenes, Leonidas would have been well positioned to claim the throne without taking Gorgo to wife, if he had found the marriage objectionable.  Certainly, if he were the kind of man, as some historians claim, who was capable of committing fratricide and regicide to lay claim to the throne in 480, than he need not have gone to the trouble of marrying Cleomenes’ daughter. He would have found ways of disposing of her as well as her father.  Second, while Spartan law did not give women any official say over their husbands, it hardly seems likely that Gorgo, who went down in history as outspoken even in matters that did not directly concern her, was going to meekly accept a man she did not want. In short, while there is no evidence of strong mutual attraction, there is good reason to believe that both parties to the marriage found it acceptable.

There are two incidents in the historical record, however, that hint at something more than a marriage of convenience. The first of these is the famous scene in which Gorgo deciphers the significance of the apparently blank writing tablets sent by Demaratus.  The way the scene is written, it is clear that Demaratus has sent a message to the Spartan state – not to Leonidas personally. But “no one” could figure out what the blank tablets meant until Gorgo suggested scraping the wax off them.  The importance of this scene is two-fold. First, it is further evidence of Gorgo’s cleverness, but secondly,  it shows that Gorgo was present when affairs of state were being discussed. A message to Sparta would most likely have been sent to the ephors or the Gerusia. If Gorgo was present when either of these bodies were meeting, it could only have been because Leonidas was willing to let her be present – a clear sign of respect.

And Gorgo returned the compliment.  When asked by a foreign woman why Spartan women were the only women in the world who “ruled their men,” Gorgo allegedly said it was because Spartans were the only women who gave birth to men.  Her classically Laconic answer went straight to the heart of the matter, accurately diagnosing the low status of women elsewhere in the Greek world as the product of misogyny.  Only Spartan men, Gorgo implied, were man enough not to be intimidated by strong, out-spoken women. That is not the answer of a woman, who thinks little of her own husband.

This second incident is revealing for another reason as well.  Since most Greek women were confined to the back of their own houses and rarely set foot outside except for weddings, funerals and assisting in the childbirth of relatives, it is hardly likely that Gorgo’s allegedly Attican interrogator was outside of her own four walls, much less outside her city.  The woman who asked Gorgo about the strange power of Spartan woman was in her own environment; Gorgo was the visitor. That means that Leonidas took Gorgo with him when he travelled abroad.  That in turn suggests a far closer relationship than a conventional marriage.

Unfortunately, the only exchange between Leonidas and Gorgo that has been passed down to us it is little more than ideological drivel.  Allegedly, Gorgo asked Leonidas for his “instructions” or “orders” as he marched away to his death and he told Gorgo to do her eugenic duty to “marry a good man and have good children.”  This text-book exchange is so stereotypical that it is very probably spurious, intended to give greater credence to the ideology contained by putting it into the mouths of heroes centuries after both Leonidas and Gorgo were long dead.

In summary, Leonidas was the son of a man who defied the ephors for love of his mother. He married voluntarily a young woman, who had already established a reputation for being out-spoken and politically acute. He included her in contexts where affairs of state were being handled. He travelled with her abroad. He had at least one child with her. And he may have explicitly urged her to marry again and found a new family after his own death. A love story? Not necessarily, but it has the makings of one….