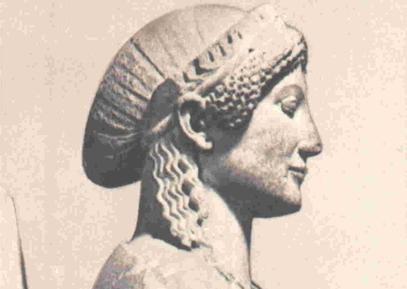 Nothing has shaped the image of Spartan women in the popular imagination more than the alleged admonishment of Spartan mothers to their sons to return from war either with their shield or upon it. The image of brave mothers who would prefer to see their sons dead rather than disgraced has captured the imagination. Hollywood gave this supposed tradition a prominent place in the film “Three Hundred Spartans”, and Steven Pressfield eulogised Spartan mothers for this attitude in his blog on warriors. Yet there are a number of oddities about this stalwart feature of the popular view of Spartan society which suggest that it – like so many aspects of conventional wisdom about Sparta – may be a complete fabrication.

Let’s start by looking at the sources. Plutarch includes no less than seventeen “sayings” that he attributes to “Spartan women”, all of which appear to corroborate a widespread attitude among Spartan matrons consistent with the laconically expressed sentiment “with it or upon it”. In no less than three of these, fiercely patriotic mothers kill, with their own hands, cowardly sons who have failed to live up to their ideal. In others, the mothers revile their sons in insulting language – for example, suggesting they crawl back into the womb. In their mildest form, these sayings portray matrons who have lost sons in battle cheerfully going about their business rather than grieving. In two, when a mother learns of the death of a son from another male relative (in one case a second son and in the other her brother), she suggests that he (the relative) join the dead. In one, a woman is even portrayed losing five sons in battle but announcing she is glad because the battle itself was won.

Aside from the fact that undoubtedly many of these sayings are simply different versions derived from the same original source, almost all are anonymous. I am always suspicious of anonymous sources regardless of context, and this fact alone makes me question the veracity of the sayings. Admittedly, since it was considered dishonourable for a woman to be talked about, one might argue that Plutarch did not name names (or his sources didn’t) out of respect for the women involved; but that does not explain why the cowardly sons chastised or murdered by their mothers – much less the heroic sons whose deaths are not mourned – are not identified. Surely there was no reason not to name cowards and heroes, since this would shame the former and honour the latter in future generations?

In addition to the issue of anonymity, the sayings lack any kind of detail that would enable them to be dated or otherwise put into context. This likewise detracts from their authenticity. They are all vague and generic, as if they are at best apocryphal or at worst bad fiction.

But the sayings are implausible for two concrete reasons as well. First, given the fact that Sparta fought most of her battles far from home, one wonders how the sons of these patriotic matrons managed not only to break the Spartan line and flee the battle, but also to escape the wrath of their comrades and the discipline of their officers. Presumably the Spartan army had very little tolerance for cowards, so the sons had to desert from the army altogether and sneak back to Lacedaemon to seek the aid of their mothers. Here, others sources tell us, they would be treated as “tremblers” and suffer civic sanctions. This begs the question of why any Spartan who failed to do his duty in war would risk being seen in Sparta at all – and what they could possibly expect of their mothers!

Second, and even more telling against the probability that these sayings are genuine, is the simple fact that Spartans buried their dead near the field where they fell. This means that the last half of the famous saying “with it [your shield] or upon it” is utter nonsense in the context of Sparta. Sparta’s battle dead were not brought home on their shields, but as Nigel Kennel puts it in Spartans: A New History (p. 157), “served as tangible signs of their city’s ability to project power”. No Spartan mother would have been unaware of this custom.

Turning from the issue of authenticity, let’s reflect more closely on the content of the sayings. At their best, the sayings portray a soldierly ideal of “do or die” being reinforced and shared even by that one element of any society that would be most easily forgiven for not supporting it: the mothers of soldiers. Telling a son in the abstract to return victorious or not at all is certainly not unique to Sparta. Patriotic mothers have allegedly done that in every society caught up in what the women believed to be a just war.

Yet the sayings collected by Plutarch go considerably further. They portray women who are so patriotic that they rejoice at the death of their sons, or tell surviving sons to follow the example of their dead brothers. Worse, in three cases the mothers are so fanatical as to kill their sons with their own hands. Is there anything appealing, attractive, or admirable about such creatures?

The answer is no – and, I believe, that is exactly as it was intended to be. I believe these sayings did not originate in Sparta at all.

Why would the Spartans have had an interest in remembering and repeating incidents (five of Plutarch’s sayings) in which Spartan soldiers first failed to absorb the ethos of their society and then fled in the face of the enemy to run home to their mothers? These sayings, after all, don’t just portray ideologically radicalized mothers (who incidentally failed to raise their sons to share their values), but young men who singularly fail to live up to the ideal of their society as a whole. The young men who return alive have ostensibly all gone through the Spartan agoge and are members of Spartan dining clubs and soldiers in her army. And yet, according to these sayings, they still don’t live by the code. In short, these sayings imply, the entire Spartan upbringing was highly ineffective. It hardly seems reasonable that the Spartans would have an interest in recording and remembering such young men – no matter how patriotic their mothers were.

Furthermore, if the purpose was to reinforce the ethos of “victory or death”, then anonymous women and anonymous sons would have been blunt, indeed useless, instruments. How much more effective would it have been to tell how the survivors of Thermopylae (with name and patronymic) were reviled by their named mothers? If the Spartans wanted to make examples of patriotic mothers, they would have chosen real incidents from real wars and identified the brave women and their abhorrent sons by name. Nor would they have made the mistake of suggesting that Sparta’s victorious dead were brought home on their shields.

Sparta’s enemies, on the other hand, had no need for real names or real battles and no need to be particularly accurate about details (like where one buries one’s dead), because the intended audience was domestic. If the purpose of these sayings was to reinforce the “Feindbild” (the image of the enemy) – to make sure that even Sparta’s women were seen as enemies – then the more generic the stories were, the better. That way they became applicable to all times, to every battle, to every enemy soldier, to every Spartan mother.

I believe these sayings attributed to Spartan women were, in fact, enemy propaganda. They were intended to portray the women – even the “little old ladies” – of Sparta as repulsively different from normal (read: good) Athenian/Theban/Arcadian mothers, who naturally all adore their sons. The point is to depict Spartan women (always the object of horrified fascination on the part of other Greek males) as lacking even that most primeval of all instincts: the maternal instinct. Spartan mothers are shown to be unnatural, unfeminine creatures that deserve no sympathy even in their adversity. The sayings tell Sparta’s enemies that there is no need to pity Sparta’s women as one did, for example, the Trojan women. Go ahead, the sayings insinuate, kill their sons; because if we don’t kill them in battle, the abominations in female form who gave them life, the Spartan mothers themselves, will kill them when they get home.

As enemy propaganda against Sparta, these sayings had another even subtler message: namely, that Sparta’s legendary hoplites were really just a bunch of cowardly mama’s boys. Collectively these sayings suggest that Spartan soldiers, far from fighting to the death even in a hopeless situation, would run all the way home to their mothers, if only they got the chance. Why should any normal Athenian/Theban/Arcadian young man fear an army made up of a bunch of mama's boys?

As propaganda devised by Sparta’s enemies, these sayings served a dual purpose. First, they contributed to the overall image of Spartan women as repulsive, because they showed that in addition to being licentious as young women and adulterous as wives, Spartan women were heartless mothers. Second, they counteracted the legendary image of Sparta’s men as the spiritual descendants of Leonidas’ legendary band of 300, ready to fight tooth and nail even in a hopeless situation.

As propaganda intended for a domestic audience, these sayings diminished fear, bolstered courage, and undermined any sense of identification with the foe. And as such, they tell us something about Sparta’s enemies and their need to counter awe of Sparta’s young men and sympathy for Sparta’s mothers. What they do not do is tell us anything whatsoever about Spartan women.

What is tragic is that so many modern readers take them at face value.

The above essay first appeared in "Sparta: Journal of Ancient Spartan and Greek History," Vol. 7, Issue 4, 2011, pp.24-26. It is reprinted here with the permission of the editors of "Sparta."