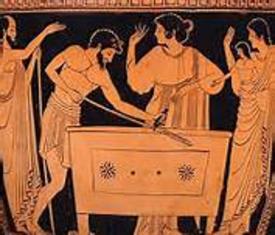 HElots vS. Slaves: a Comparison

In 413 BC, according to Thucydides, an estimated 20,000 Athenian slaves ran away to the Spartans, who had established a permanent fortress at Dekeleia.  For these oppressed and exploited individuals, the Spartans were liberators.  Their story, ignored by the usual depictions of Sparta that stress the “exceptionally harsh” lot of Sparta’s helots, in fact highlights a significant reality: helots were significantly better off than chattel slaves, because they enjoyed significant privileges that chattel slaves in the rest of the ancient world did not.

First and foremost, they lived in family units, could marry at will and raise their own children.  Almost equally significant, they could retain half their earnings.  Such income could be substantial, as is demonstrated by the fact that no less than 6,000 helots were able to raise the significant sum of five attic minae necessary to purchase their freedom in 369 BC, according to Xenophon.

In contrast, chattel slaves had no family life and their children belonged – literally – not to them but their masters.  As to the fruits of their labor, these accrued exclusively to their masters, and even freed slaves (at least in the case of former prostitutes) had to surrender some of their earnings in perpetuity to their former masters after their manumission. In Athens, furthermore, slaves could be tortured for evidence in trials against their masters, because the Athenians believed a slave’s word was worthless unless obtained under torture – a bizarre and chilling attitude to fellow human beings.

I would like to note, further, that Athens’ economy was no less dependent on slaves than Sparta’s was on helots. Slaves worked Athens silver mines -- under appalling and dehumanizing conditions worse than any horror story told of helots even by Sparta’s worst enemies. Slaves also provided essential agricultural labor and manned the workshops that made Athens famous for its handcrafts. Even the statues on the acropolis, the wonder of all the world to this day, were largely the work of slaves, who earned “wages” only for their master’s pockets and had to make do with whatever scraps he deigned to give them.

Defenders of Athens are apt to point out that Athens’ laws prohibited the execution of slaves and no one but the slave’s own master was allowed to flog a slave.  In contrast, allegedly war was declared on Spartan slaves annually and an organization, the kryptea, allegedly existed solely for the purpose of eliminating potentially rebellious helots.  These Spartan customs are indeed harsh, but they should also be viewed in perspective.

First, according to Plutarch, both the annual declaration of war and the creation of the kyrptea post-date the helot revolt of 465 and have no place in the Golden Age of Sparta, the archaic period.  Second, even after the helot revolt and the onset of Spartan decline, we know of only a single incident in which helots were in fact executed without cause.  According to Thucydides, in ca. 425/424, 2,000 helots were led to believe they would be freed, were garlanded and paraded through the city, only to then “disappear.” Everyone presumes they were killed.

If this really happened as described, it was an unprecedented atrocity. If true, it besmirches the record of Sparta for eternity. It would nonetheless also still be only an isolated incident. Beside this atrocity, I would like to place as exhibit B the slaughter of the entire male population of island city-state of Melos by Athens in 416. Melos was a free city. It’s only “crime” was to remain neutral in the Peloponnesian war. Yet Athens subjugated the city, slaughtered the adult males and made all the women and children chattel slaves. I’d call that an atrocity too – and every bit as bad as the disappearance of 2,000 helots.

There is no doubt about what happened to Melos. We have many sources and know the fate of many individuals that further verify and illuminate the brutality of the event.  But the story of the 2,000 helots has only a single – albeit usually reliable – source: Thucydides.  As Nigel Kennell in his book Spartans: A New History notes, Thucydides’ dating of the incident must be off because at exactly the same time (425/4) Brasidas was recruiting helots to fight with him – something he did successfully.  Why would young men have been willing to volunteer to fight with Brasidas (which they most certainly did), if they had just seen 2,000 of their fellows slaughtered? It is so unreasonable to believe helots would have volunteered if the alleged massacre had just taken place, that Kennel concludes that Thucydides was referring to an incident that had occurred at some vague/unknown time in the past.

That is surely one explanation, since after Brasidas’ helots had proved their worth as soldiers, i.e. after they had proved just how dangerous they could be to the Spartiates, no less than 700 of them were liberated by a vote in the Spartan Assembly. This means that, if Thucydides is correct and the Spartans had once been so afraid of strong, healthy helots that they slaughtered 2,000 of them before they were trained to bear arms, by 421 a majority of Spartan citizens had no qualms about freeing 700 helots, who were not only healthy, but trained and experienced fighting men. Why would they free these 700 hundred after killing 2,000 others? It doesn’t add up, and so the story of the murder of the 2000 has to be questioned.

While it is possible Thucydides was describing an earlier event, it is almost certain that the only evidence he had was hearsay. The modern historian should not exclude the possibility that the entire “atrocity” was either a gross exaggeration or outright propaganda.

And who would have a greater interest in spreading rumors of such an atrocity than Athens itself? An Athens, whose slaves were deserting in droves by 413.  One thing is clear: those 20,000 Athenian slaves, who turned themselves over to Spartan mercy, did not expect to be slaughtered. Either they had not heard the “truth” about how the Spartans “really” treated their helots, or they didn’t believe the stories they were told by their Athenian masters.

Thucydides is silent on what happened to those 20,000 former Athenian slaves, either because he doesn’t know – or it wouldn’t fit into his neat polemic against Spartan brutality.  We know, however, that Sparta’s citizen population had already declined dramatically by the end of the 5th Century BC and yet Sparta kept fighting and winning battles. It did so by relying more and more on non-citizen soldiers, and a fleet manned by non-Spartiates. It is also in this period that the first references to a curious new class of people, the “Neodamodeis,” emerge in literature.  The most common interpretation of this term is that these “New Citizens” were freed helots or the children of Spartiate men by helot women.  There is, however, no reason to assume that some of these new citizens were not freed Athenian slaves as well. If so, then these men surely found freedom in Lacedaemon.